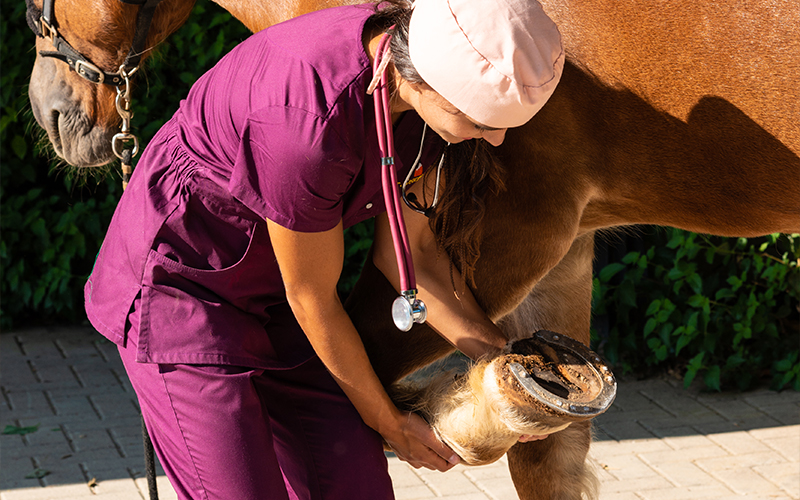 by Jean-Yin Tan, DVM, DACVIM (LAIM)
Apr 9, 2020
Laminitis, also known as "founder," means inflammation of the laminae, the connective tissue of the hoof in horses. Learn more about symptoms, treatments and prognosis of laminitis in horses here.

Almost every horse owner and rider is familiar enough with the terms “founder” and “laminitis” to know it is a condition they hope to never have to experience.  Laminitis means inflammation of the laminae, the connective tissue of the hoof.  The laminae hold the hoof wall to the coffin bone (bone within the foot) and during laminitis, inflammation causes the connections to become weak. This results in painful separation of the hoof wall from the coffin bone. Laminitis can result from metabolic/endocrine disorders (Equine Metabolic Syndrome or Pars Pituitary Intermedia Disease (PPID; Equine Cushing’s), systemic inflammation (e.g. diarrhea, grain overload), and/or mechanical forces (e.g. excessive weight bearing on 1 limb due to injury of the other limb).

What signs indicate a horse may have laminitis?

Typical clinical signs of laminitis include:

A grading system called the Obel grading system has been established to describe the severity of clinical signs, ranging from Grade I (least severe, treading feet but not lame at the walk) to Grade IV (unwilling to move).

In horses with laminitis associated with metabolic/endocrine disturbances such as Equine Metabolic Syndrome, the signs of laminitis may be much more subtle and sometimes subclinical. You may see:

How do we diagnose laminitis?

A preliminary diagnosis is often made by an experienced horseman or veterinarian through observation of classic clinical signs and physical examination.  Horses with laminitis are also typically sensitive to hoof tester pressure over the toe.  Diagnosis can be confirmed through radiographs (X-rays), which can show sinking or rotation of the coffin bone within the hoof capsule, as well as thickness of the sole and more chronic bone changes. This sinking or rotation is from the degeneration of the laminae and loss of connection between the hoof wall and the coffin bone.  Digital venograms can be used to visualize the network of blood vessels within the foot by injecting contrast into the veins and then taking radiographs. These venograms are used to evaluate the level of blood flow to the foot and, therefore, prognosis for recovery.

How can a horse with laminitis be managed?

Laminitis can be treated using several possible modalities. The first and most important would be the use of anti-inflammatories and pain medications, to combat the source of the inflammation, and pain.  The most common medications used are non-steroidal anti-inflammatory drugs (NSAIDs) such as phenylbutazone (Bute).

An equally important modality of treatment is mechanical and supportive care.  Deep bedding and cushioning of the foot (sometimes using special boots) alleviates the pain but also reduces concussive forces.  Working with your veterinarian and farrier is very important with cases of laminitis, as they will work to decrease “breakover” and those mechanical forces by fixing a “long toe/low heel” conformation. A wedge may be applied by the farrier to keep the heel higher than the toe, which alleviates tension from the flexor tendons that run down the back of the leg. The combination of tension of the flexor tendons and weakened laminae can cause rotation of the coffin bone. In severe cases of laminitis, surgery is sometimes performed to cut the flexor tendon.

One of the findings during laminitis is decreased blood flow to the extremities.  Medications such as acepromazine and pentoxifylline can be used to increase perfusion.  Research and advancements in laminitis treatment are ongoing, with new medications, recommendations, and therapeutics being developed all the time.

What is the likelihood a horse with laminitis will return to its previous work?

Prevention and early treatment of laminitis constitute the best hope for recovery.  Laminitis can be devastating due to intractable pain, severe sinking or rotation of the coffin bone, and/or loss of blood flow and perfusion to the foot.  In the most severe cases, these factors can result in euthanasia.  However, being familiar with the disease process, and recognizing risk factors and clinical signs early can sometimes prevent the worst from happening.

Can laminitis be prevented?

About 90% of horses with laminitis have endocrine or metabolic disorders that can be identified prior to the development of clinical signs.  For example, horses who are overweight or have regional areas of fat deposition can be tested and treated for Equine Metabolic Syndrome (EMS).  Horses who are elderly and develop thick hair coats can be tested and treated for Cushing’s disease (aka PPID).

In the remaining 10% of horses, laminitis may be prevented by identifying high risk conditions such as grain overload, colitis (diarrhea), retained placenta, and enteritis (colic caused by small intestinal inflammation), and applying treatment before structural damage occurs. In these cases, horse are often treated with anti-inflammatory drugs and icing of the feet. Keeping the feet at about 4 degrees Fahrenheit may help prevent laminitis in these situations.

What are the key take-away facts about laminitis?

Although laminitis is scary and the consequences can be devastating, a greater understanding of the risk factors can help prevent an issue from occurring. Early identification of clinical signs and taking steps to prevent it before it happens can lead to more effective treatment and may save the life of your horse.  If your horse tends to be an easy keeper, has suffered from a bout of laminitis in the past, or has other signs of EMS or Cushing’s disease, have a discussion with your veterinarian or a Board-certified Large Animal Internal Medicine Specialist and start reducing the risk now.