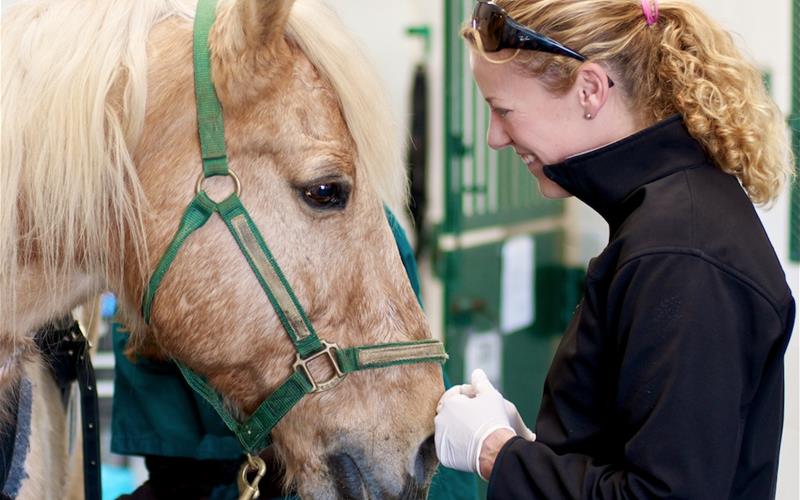 What is Pituitary pars intermedia dysfunction (PPID) or Equine Cushing’s?

Pituitary pars intermedia dysfunction (PPID), often referred to as Equine Cushing’s Disease, is the most common endocrine disorder in older horses, ponies, donkeys and mules. PPID most often affects older horses (teenage or older) but has been observed in some horses younger than 10 years of age. In cases of PPID, the hypothalamus and pituitary gland, which reside at the base of the brain (inside the skull), fail to communicate appropriately. These glands normally communicate via nerves and blood flow to signal production and release of many hormones into the horse’s bloodstream. This failure of normal communication results in the pituitary gland becoming hyperactive, producing an excess of various hormones. The pituitary hormones that are routinely measured for diagnosis of PPID are adrenocorticotropic hormone (ACTH) and thyrotropin releasing hormone (TRH).

What are the most common signs a horse has PPID?

The elevated levels of various hormones lead to many visible changes, including:

Some PPID cases may have abnormal insulin (insulin dysregulation/resistance) or blood sugar levels. In addition, they may also have high fecal egg counts (parasitic load).

How does your veterinarian diagnose PPID?

To diagnose PPID both resting and stimulation tests are available. For horses with advanced signs of disease, often a resting ACTH concentration measurement is performed, ideally between July and November. For horses in early stages of disease with clinical signs or in horses being tested during the non-fall months, the Thyrotropin Releasing Hormone (TRH) Stimulation test may be performed (with ACTH levels measured before and after administration of TRH) as this test may be more helpful in diagnosing early disease. If results are negative, then repeat testing is recommended in 3-6 months. Protocols for the recommended tests are available for veterinarians in other resources. The challenge is making a PPID diagnosis at an early stage in the disease process so owners and veterinarians can begin managing the disorder sooner.

Further diagnostics to include or consider are:

One should consider repeating the CBC and biochemistry profile annually.

Although PPID is not curable, how is a horse with it managed?

While PPID is not curable, medical management and meticulous husbandry are recommended to reduce the signs and symptoms associated with this disorder. An integral part of PPID management is medical treatment. The most widely used drug is the brand name veterinary product Prascend® (pergolide). It helps decrease some of the hormone production by the pituitary gland. Several studies have shown that Prascend®-treated horses have significant improvements within a year in hair coat, frequency of urination/drinking, frequency of infections and laminitis occurrences, and many laboratory test results. The drug is usually prescribed for once daily administration by mouth. One common side effect you may see with this medication is decreased appetite, however by working with your veterinarian, you can find an appropriate dosing regimen to minimize this side effect.

Another drug, which may be useful in treatment of PPID, is cyproheptadine. Studies suggest that cyproheptadine is not as effective in improving PPID symptoms compared to Prascend®. However, it may aid those animals with minimal response to Prascend® alone. A combination of both drugs is occasionally recommended.

Over time, the amount of drug your horse requires to manage this condition may change due to progression of the disease. Repeated testing (as described above) can help your veterinarian to determine the need for an increase in drug dose or addition of another drug to your horse’s medication regime.

If your horse has signs of insulin dysregulation (equine metabolic syndrome; rarely progressing to diabetes type 2), other medication and management recommendations may be made such as Thyro-L, metformin, InsulinWise, in addition to strict weight management.

The other important component of management of PPID is maintenance of excellent husbandry and general health care. Close attention to nutrition, vaccination and deworming, medical treatment and hoof care of horses with PPID is recommended.

Good husbandry practices to reduce the symptoms of PPID include:

What is the prognosis of a horse with PPID?

PPID is a disease of older equids that can be managed successfully, but not cured. Chronic infections and laminitis tend to be the most detrimental and frustrating clinical manifestations of the disorder. Thus, early recognition, lifelong administration of pergolide, and regular veterinary and farrier care are imperative to help one’s horse or pony maintain a good quality of life.