Cardiac Arrhythmias in Dogs and Cats 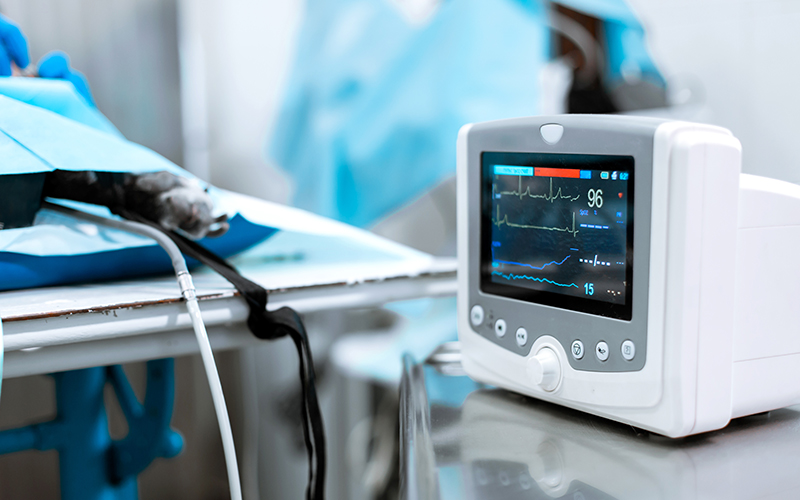 How does the heart know when to beat?

The sinus node, or sinoatrial (SA) node, is a clustered collection of similar cells located in the top of the right atrium (the first chamber that blood enters as it returns from traveling through the rest of the body), its purpose being to generate electrical impulses and to serve as the heart’s pacemaker.

The other node in the heart is called the atrioventricular (AV) node. Like the SA node, the AV node is a clustered collection of similar cells situated in the bottom of the right atrium, close to the ventricle (the chamber that receives blood from the atrium). The AV node receives impulses from the SA node.

What is a cardiac arrhythmia?

If you were to listen to your heart with a stethoscope, the “lub-dub” (heart beat) you hear is the sound of the heart valves closing. This corresponds to the ventricular muscle contracting. The “lub” consists of the left and right atrioventicular valves closing. The left cardiac valve is the mitral valve and the right cardiac valve is the tricuspid valve. The “dub” consists of the closure of the pulmonary and aortic valves after the ventricles have ejected blood into the pulmonary artery (large vessel supplying the lungs) and aorta (large vessel supplying the body), respectively.

What are types of arrhythmias?

What are causes of arrhythmias? 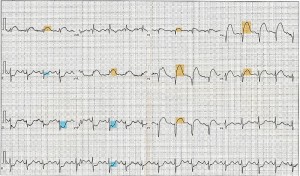 What are the symptoms of arrhythmias?

However, it is not uncommon for dogs and cats to appear outwardly normal (no symptoms) despite having a cardiac arrhythmia.

How are arrhythmias diagnosed?

Your family veterinarian will diagnose an arrhythmia when listening to the heart with a stethoscope or on an EKG reading. An EKG (electrocardiogram or ECG) is the best diagnostic test to identify and diagnose the specific type of arrhythmia. A Holter monitor is an ambulatory EKG (the dog can wear it home and the device records the cardiac rhythm over the next 24-48 hours) that determines the frequency (how often the arrhythmia occurs) and severity of the arrhythmia. Your family veterinarian will then recommend treatment and/or referral to the Veterinary Cardiologist, if the arrhythmia appears dangerous on the EKG or the Holter monitor.

How are arrhythmias treated?

A pacemaker (a surgical procedure performed by a Veterinary Cardiologist) is the standard recommended treatment for sick sinus syndrome, atrial standstill and complete heart block.

What is the prognosis for a dog or cat with an arrhythmia?

The prognosis is highly variable depending on what type of arrhythmia is present and if there is a non-cardiac and treatable cause versus underlying severe heart disease (i.e., dilated cardiomyopathy in Doberman Pinschers). Pacemaker implantation for a slow heart rate (3rd degree AV block and sick sinus syndrome) is associated with a good prognosis in the absence of severe underlying cardiac disease.