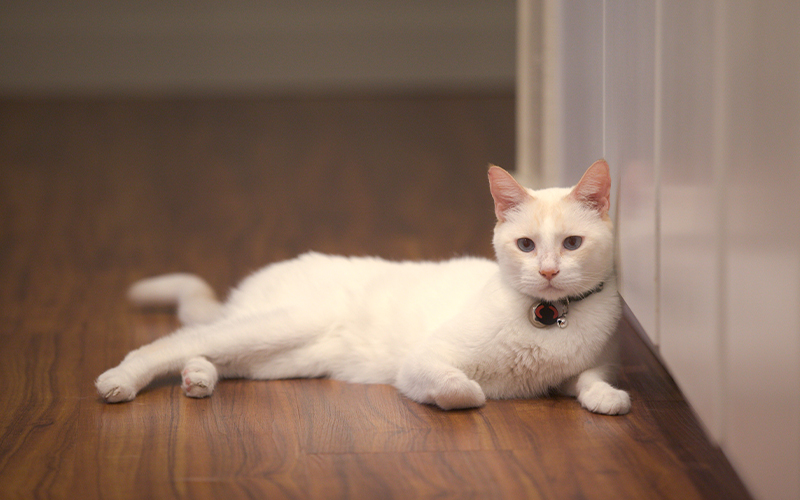 Stormy was only four weeks old when he was rescued from a litter of kittens on the island of Oahu in Kaimuki, Hawaii. His owner, Kristen Obara, adopted him from her cousin Dr. Alan Obara, a veterinarian at the Kalihi Pet Clinic. Kristen, who owned two cats and a chihuahua at the time of his adoption, described Stormy as an instantaneously great addition to her family. Some of Stormy’s favorite activities included playing fetch with a balled-up piece of paper and surprise attacking his brother, Wesker.

“He is an incredibly active, playful cat that is always getting into mischief and loves to run and jump everywhere. The only time that he stops is when he sleeps,” said Kristen.

Stormy had just turned seven years old when Kristen came home from work one day, to find that he didn’t seem to be his normal, playful self.

“I put down his food and he had no interest in eating it. His tail was drooped down, he was meowing in a strange manner, and he seemed to be in a lot of pain with no interest in doing anything but sleeping,” said Kristen.

After taking him to see Dr. Obara at Kalihi Pet Clinic, it was discovered that Stormy had lost sensation in his toes and tail, and he was referred to the Veterinary Emergency and Referral Center of Hawaii’s (VERC) Neurology clinic for closer evaluation and specialty diagnostics. Board-certified Veterinary Neurologist Baye Williamson DVM, DACVIM (Neurology), at VERC examined Stormy when he was first admitted. After placing Stormy under general anesthesia and performing an MRI of his lumbar spine, Dr. Williamson diagnosed Stormy with a severe intervertebral disc extrusion, which is a large, slipped disc that causes compression of the nerves. The options for treating intervertebral disc extrusion in cats are either through prescribed medication, for less severe cases, or surgery, for more severe cases. In cases such as Stormy’s, where the spinal cord appears to be significantly compressed, surgery is usually recommended.

Kristen was shocked by the extent of Stormy’s injury and could not pinpoint exactly how it had occurred but suggested that due to his playful nature and tendency to tumble around the house with the other cats, he may have fallen from their second-floor balcony. After discussing each of the options for managing this type of injury, Kristen elected to proceed with the surgery to decompress his nerves and improve his chance for survival.

“Because of the severity of Stormy’s clinical signs - the loss of tail sensation and bladder atony (functional strength) - the best recommendation was to proceed with a procedure called a hemilaminectomy where part of the side of the vertebra is removed and neurosurgical instruments are used to remove the extruded disc material,” said Dr. Williamson. “With loss of sensation, the prognosis for return of function (movement and ability to urinate without assistance) with surgery is 50%. Without surgery, the likelihood of restoring function would only be 10%.”

In basic terms, a hemilaminectomy is when the Veterinary Neurologist drills a window into the spine where the disc is bulging out and uses surgical instruments to relieve pressure on the nerves and restoring function to the place of the ongoing injury . Due to the location of his injury, Stormy also had to have a urinary catheter put in to drain his bladder and keep it from overstretching while flaccid.

Luckily for Stormy, Dr. Williamson has extensive training and experience with this type of surgery and the procedure was successfully conducted. After the surgery, Stormy was administered pain medications, anti-inflammatory medications, and medications that would help his bladder function better. Dr. Williamson also suggested that they keep Stormy for a few extra days so that he could be monitored by a team of veterinary specialists in case of any complications.

Prior to discharge, Kristen was showed how to express Stormy’s bladder and instructed that he should have limited activity for the next month, until he was rechecked. Although Dr. Williamson remained optimistic about Stormy’s condition, she was transparent with his owners that she could not guarantee that he would make a full recovery due to the uncertainty of these types of spinal cord injuries. Miraculously, Kristen reported at his four week follow-up, that almost immediately after discharge, Stormy was urinating on his own and had regained most of his tail sensation and movement back as well.

“The special thing about Stormy’s case is that his prognosis was so guarded due to the loss of sensation; however, he has thankfully made an almost full recovery,” said Dr. Williamson.

Now, almost six months after his initial diagnosis, Stormy is back to his frisky and vivacious self. In addition to taking his regular medications, Stormy will continue to visit his primary veterinarian to ensure the trajectory of his recovery. Kristen credits Stormy’s rapid improvement to Dr. Williamson and believes that without her, Stormy might not have survived the ordeal.

“I would tell other animal owners to seek out Board-certified veterinary specialists for their animal’s care when their primary care veterinarian cannot do more for them. Dr. Williamson was a lifesaver for Stormy and if he did not have that care, he could have been paralyzed for life or even have to be put down,” said Kristen. “Today I can hardly tell that anything has happened to Stormy, he jumps and plays just like he used to.”

“Many animal owners still are not aware of the fact that specialty medicine exists and that they may have a veterinary specialist within a short distance of them,” said Dr. Williamson. “We always want to help your pet. If an owner cannot afford the recommended diagnostics, we are happy to work with them and their primary veterinarian to create a treatment and diagnostic plan for their pet.”