When Melanie and her husband moved from Colorado to a two-acre property in an Arizona valley, she did not expect to encounter any alpacas in the dry, desert climate

“We just had a cat,” she says. “But my husband’s family has a cattle ranch, and there was already a corral for horses.”

Alpacas started fascinating Melanie and she began watching online videos to learn more about these unique animals and their popularity as household pets. Soon afterwards, she spotted someone on Craigslist selling a male alpaca named Charlie who had lost his mate. The post tugged on Melanie’s heart strings, so she and her husband agreed to buy the male. Because alpacas are herd animals, they purchased an additional three alpacas, Atari, Eloise and Mabel, from a local farmer. 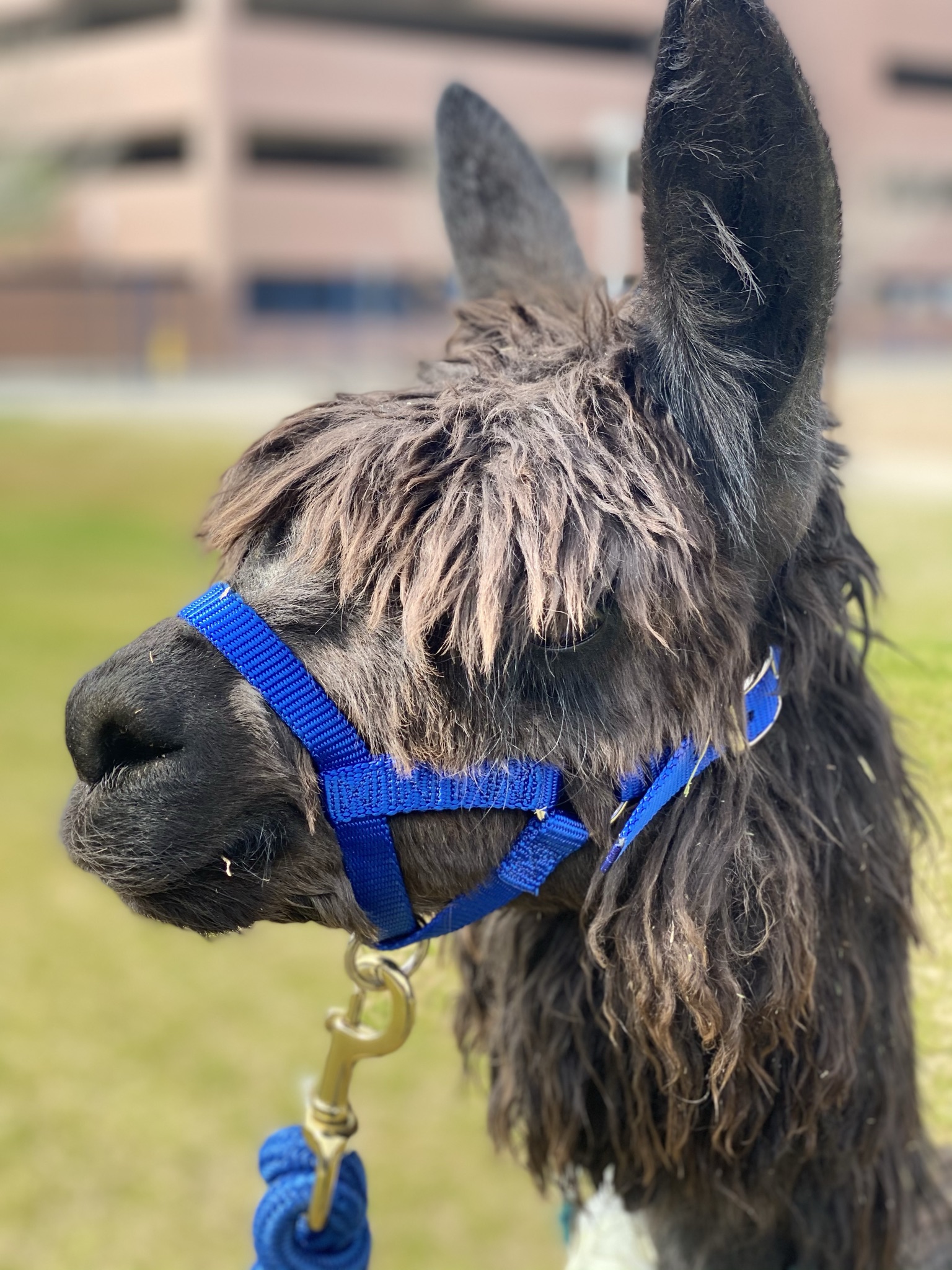 Before the alpacas came to live with them, Melanie did some research on what these cold-weather animals would need to stay healthy in the Arizona desert. She found that they would need to completely shave each alpaca twice during the summer, supply plenty of drinking water and frequently spray the alpaca’s legs to keep them cool.

By late 2020, the four alpacas had been joined by donkeys and goats that Melanie had also adopted, effectively turning their property into a makeshift farm.

“The female alpacas, Mabel and Eloise got along fantastic,” Melanie says.

To ensure the alpacas were healthy, Melanie and her husband invited a veterinarian from Midwestern University’s Animal Health Institute to their home to check in on them. The doctor conducted wellness checks and vaccinations on the alpacas to keep them protected against any diseases in the area. After giving them a clean bill of health, the veterinarian told Melanie that one of the female alpacas might be pregnant, as it’s hard to tell when an alpaca starts slowly getting a little larger.

“Something was off. She wasn’t eating as much, was slow and lethargic, and was shaking with small tremors.”

Melanie began keeping a closer eye on Mabel, and just a few days after the vet’s visit, she noticed the alpaca just wasn’t acting right. "Something was off,” Melanie explains. “She wasn’t eating as much, was slow and lethargic, and was shaking with small tremors.”

Dr. Clemence Chako, a Board-certified Large Animal Internal Medicine specialist  and clinical assistant professor at Midwestern visited Mabel to take a blood sample and to administer medicine that would help with her gastrointestinal problems. Despite the medicine, Mabel continued to get worse, and soon afterwards, Melanie brought her into the hospital.

There, Large Animal Internal Medicine specialist and assistant professor Dr. Brina Lopez gave Mabel immediate care and began searching for the cause of her illness. Due to the severity of her symptoms, Mabel was hospitalized for a considerable stretch, from January 20 to February 4, 2021. She was eventually diagnosed with pleuropneumonia, an illness which can show up in Alpaca Fever cases.

A somewhat mysterious but dangerous disease, Alpaca Fever is caused by a strain of strep bacteria and can sometimes also cause pneumonia, as it did in Mabel’s case. According to Dr. Lopez, it is not surprising that Mabel seemed fine a few days earlier at her vaccination visit, as alpacas and other camelids tend to “hide their disease.” By the time signs are obvious to the animal owner or veterinarian, an infection or disease may already be advanced. Dr. Lopez said Mabel might have had the bacteria in her system for days or weeks beforehand, and the stress of handling might have led to the bacteria finally kicking into gear.

To treat Mabel’s pleuropneumonia, which can cause a build-up of fluid around the lungs, Dr. Lopez prescribed broad-spectrum antibiotics to tackle a wide variety of bacteria, including the bacteria that caused Mabel’s illness. During her hospitalization, doctors discovered that Mabel was indeed pregnant; but, sadly, over the course of her treatment, the fetus was not able to survive. Dr. Lopez says that if the fetus had been more fully grown and survived birth, it could have also become sick with Alpaca Fever, as the bacteria is present in the shared blood between mother and fetus.

"The time they put into Mabel and our other alpacas here and at the hospital is amazing."

Mabel received around-the-clock care at Midwestern’s teaching hospital from both veterinary specialists and veterinary students, who helped to observe and care for the alpaca. “They’re always excited to work with less common species,” Dr. Lopez says of the students. “Personally, I like alpacas because they are challenging to treat sometimes, and they’re not like cats and dogs who just jump in your lap. Once I gain their trust, they will finally come up and interact with me. And I love the way they communicate by vocalizing, what we call ‘humming.’” 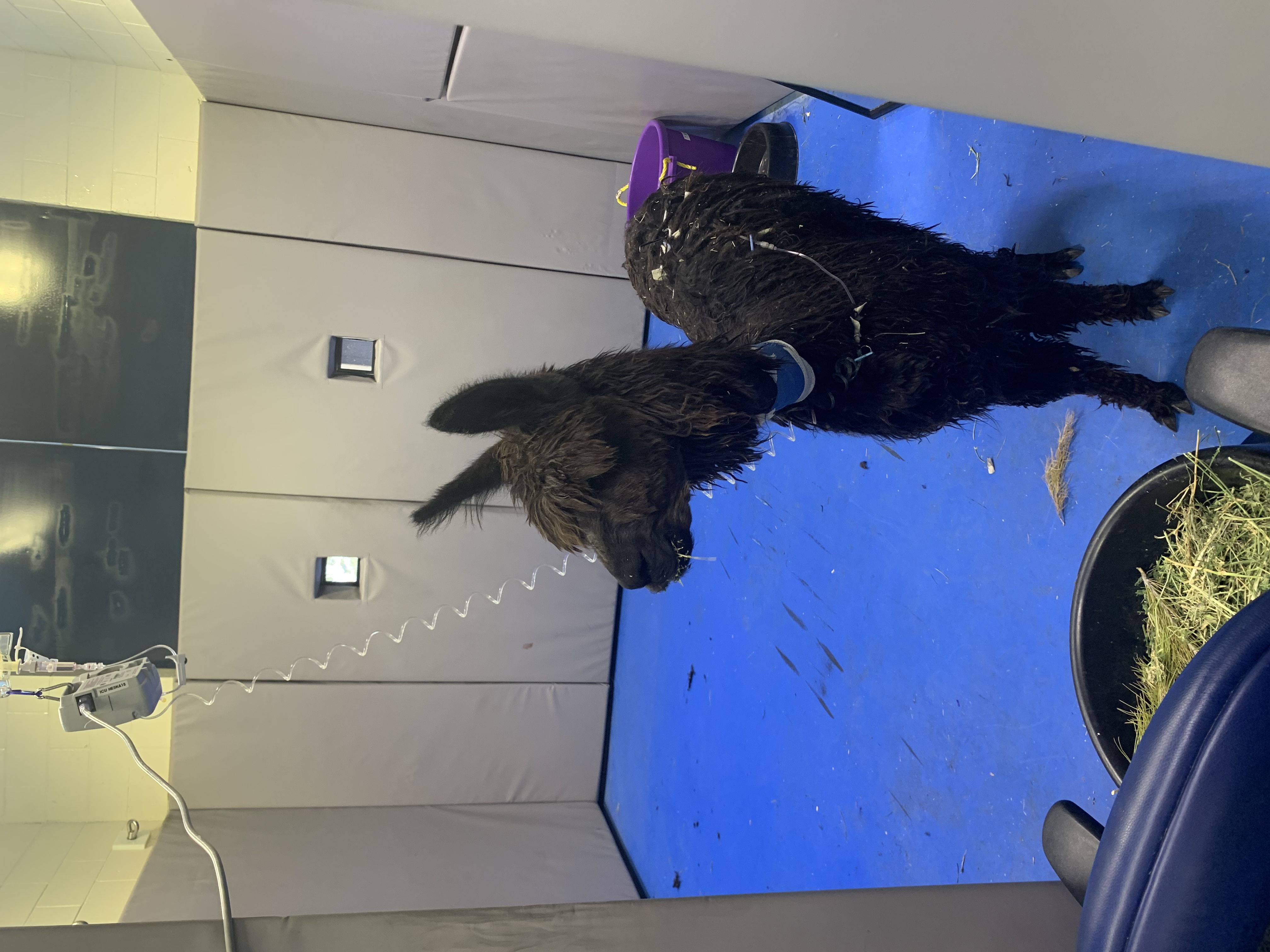 It is uncommon for an alpaca with a wide-spread infection of Alpaca Fever to survive, even with hospitalization and persistent treatments. However, due to the incredible care she received from Dr. Lopez and her team, Mabel was able to make a full recovery and is now back home with her family, both alpaca and human. She also recently gave birth to Emmett, a happy, healthy new Cria (the term for a juvenile alpaca).

“I cannot say enough about how wonderful Midwestern is,” Melanie says. “The time they put into Mabel and our other alpacas here and at the hospital is amazing.”

Having expert veterinary specialists to call for help so close to home has helped Melanie learn about and better care for the big, unique alpacas that share her property with sheep and goats. At Midwestern, Dr. Lopez and the rest of the team are thrilled with Mabel’s success and proud of the work they did together to help her survive.

“Mabel’s response to this treatment was pretty dramatic,” Dr. Lopez says. “This is a case that will absolutely go down as a win.”