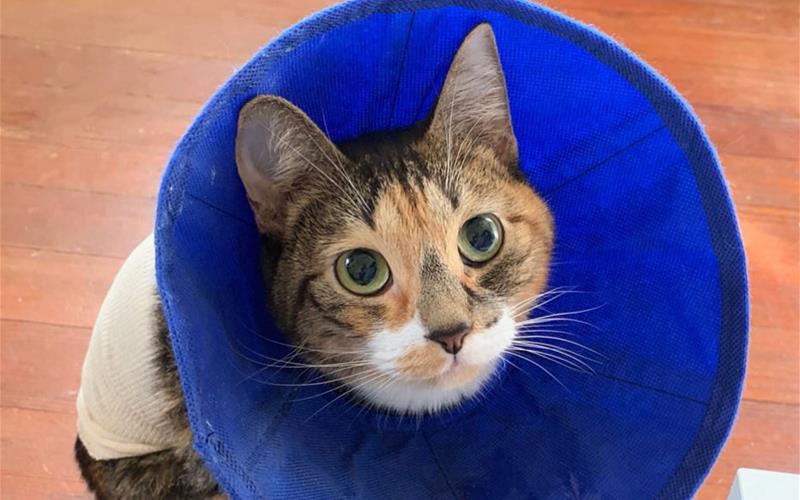 by Brendan Howard
Dec 16, 2021
Cat owners, be warned: Many cats don’t limp around, howling, when they’re in pain or get injured. They hide.

That’s what Mabel did when her owner, Gina Watts, came home to her Austin, Texas, apartment one Thursday night in December 2019.

“Mabel is food-motivated, so when I come home, she runs to the door and yells at me until I put my stuff down and give her and her brother their wet food,” Gina says. “This day, she didn’t come running.” 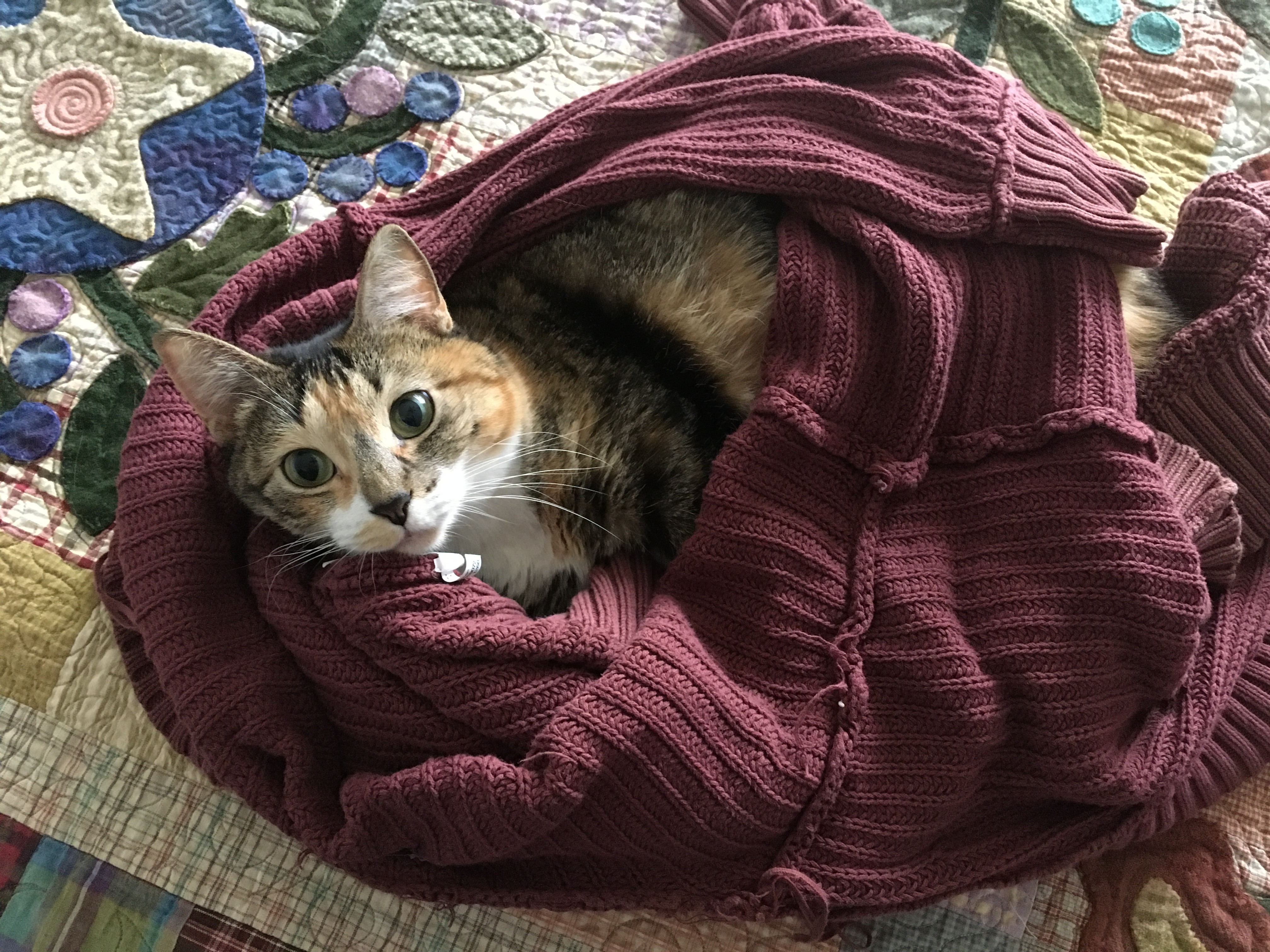 Gina went looking for the tiny cat and found her crouching in the corner of a room: “When I tried to touch her, she was clearly uncomfortable."

A little detective work around the apartment found the likely culprit: a pile of clearly vomited hair ties. But were they all out? Gina called their family veterinarian to ask for advice. She told Gina to take Mabel to an emergency veterinary hospital to make sure more hair ties weren’t stuck in her digestive system.

The team at the hospital asked to keep Mabel overnight and gave her some anti-nausea medications, as the tiny cat couldn’t eat or drink comfortably. After a full 24-hour observation at the emergency hospital and with the nausea easing up, Mabel went home with Gina to see if she’d start eating or drinking normally.

“The next 24 hours, she was interested in eating, but couldn’t keep anything down,” Gina says. She tried less and less food, wetter and wetter food, even chicken broth or pureed baby food from the grocery store. Gina took her back to the emergency room, where the veterinary team told her little Mabel needed an endoscopy, where a small camera is inserted down the throat. She was referred to another emergency hospital that was equipped to perform the endoscopy on little Mabel, who hadn’t eaten in three days.

The endoscope revealed serious damage: ulcers and scar tissue in Mabel's esophagus. “Their working theory was that because she’d vomited the hair ties, a stricture had developed,” Gina says, with the throat painfully constricted and unable to get anything passed. “They didn’t know if she was born with that stricture or if it was caused by an injury.”

"Her stricture had gotten so tight that she couldn't swallow her own saliva."

But Mabel needed to eat. The veterinarian recommended inserting a gastric feeding tube in her side to get Mabel nutrients as her throat healed. Gina agreed to the surgery and picked up Mabel from the clinic a couple of days later. She began regular feeding of the urgent-care liquid food, removing and replacing a little shirt on the cat so she or her brother, Miles, wouldn’t accidentally remove the tube.

That feeding tube would wind up becoming a staple of Gina and Mabel’s life, as Gina worked around her hours as a librarian to feed Mabel through the tube. On Christmas day, with feeding tube still in, Mabel had a new, scary kind of attack. 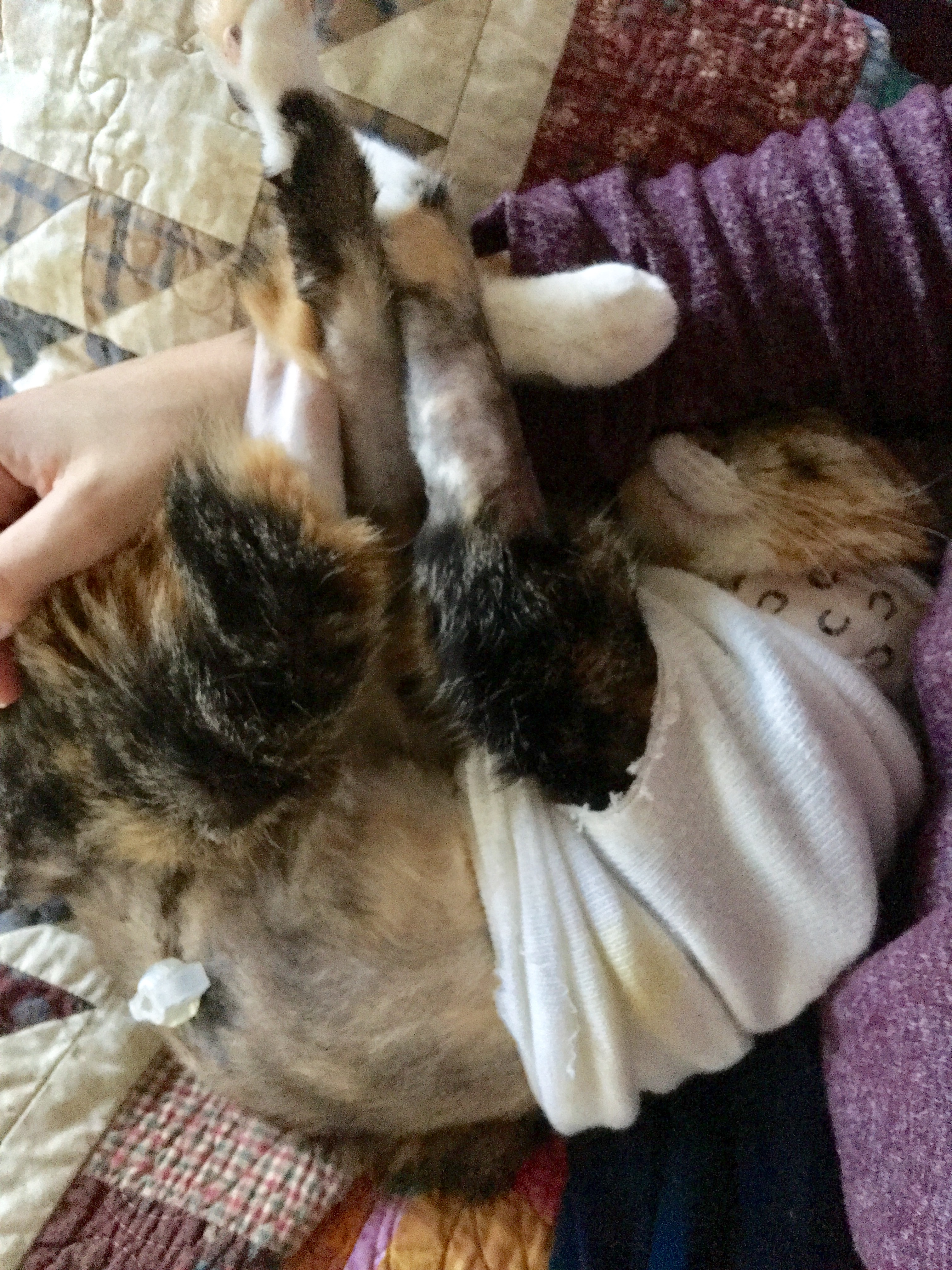 Confused and frightened right along with Mabel, Gina ran her back to the hospital. The sneezing and coughing had stopped, but the veterinary team gave her some pain medication with a sedative effect to help.

“I thought she was dying every time, and what was happening was her stricture had gotten so tight that she couldn’t swallow her own saliva,” she says. “She’d get overwhelmed with spit, try to swallow, and it would come back up. It turned into a scary cycle for her and myself. I’d follow her around the room and try to wipe off her chin, so she wasn’t trying to swallow any more than she was dealing with.”

Gina missed work as she spent many days at home helping a sometimes-choking Mabel. The veterinary team tried various medications to help, but Gina would return when an episode was bad enough. The best they could do was calm Mabel down and wait for the choking to pass.

“During this time, I was frantically forming memories, taking a thousand pictures, because I was so afraid she wasn’t going to make it,” she says. “She slept right next to me, spooned up against me when she was unwell. She was exhausted and afraid.”

With no relief, Gina worried that Mabel’s quality of life was deteriorating: “I called the hospital and asked if euthanasia should be on the table. I couldn’t help, they couldn’t help her, and I didn’t want to put her through anymore.”

"Dr. Maura Duffy is a really wonderful human being, and she knew Mabel’s whole story, and she said, 'Let’s try one more thing.”’

After the call, Gina took the next day off work. That was when Dr. Maura Duffy, who’d been working on Mabel’s cause, gave her a call.

“She’s a really wonderful human being, and she knew Mabel’s whole story, and she said, ‘Let’s try one more thing.’”

Dr. Duffy said Gina should take Mabel to Texas A&M’s veterinary hospital. If Mabel was a good surgical candidate, the team there could perform a procedure to insert a small balloon into the stricture in Mabel’s esophagus. Gina could then regularly inflate and deflate the balloon to expand Mabel’s narrow esophagus until it returned to a normal size.

The weekend of January 27, Gina took Mabel and a CD  along with a “small novel” of printed medical records to the university’s veterinary hospital in College Station, Texas. 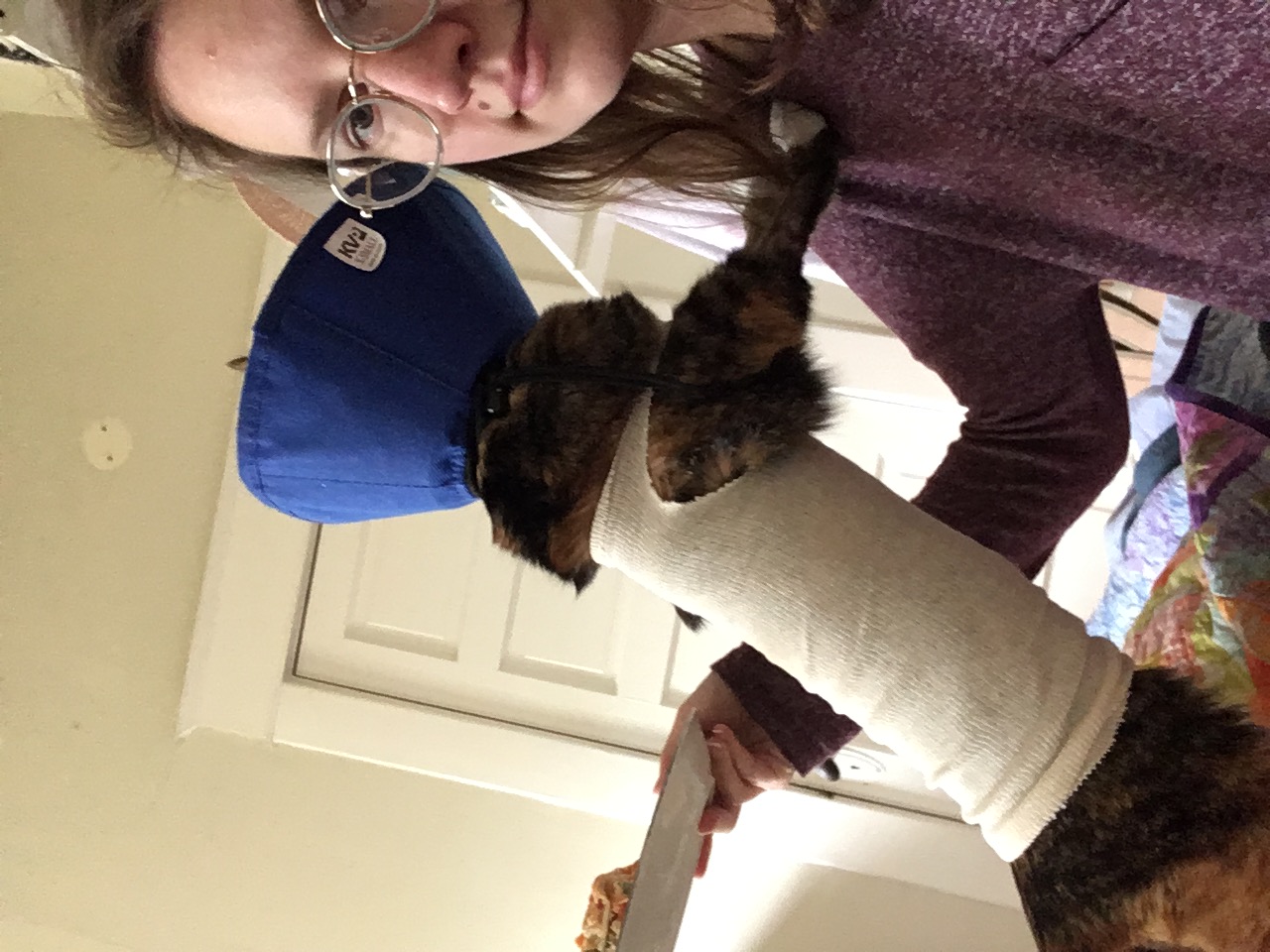 Mabel stayed for diagnostics and waited to be transferred to the internal medicine team, while Gina stayed a night then drove back to Austin for work  after Mabel was admitted.

“When we saw her CAT scan, I saw she’d torn her esophagus before, ,” Dr. Cook says. “The risks of inserting a balloon went up exponentially.”

But Mabel was already under anesthesia by the time the doctors saw how badly damaged her esophagus was, so there would be no additional suffering for her by trying a different angle on the procedure.

With Mabel already anesthetized, the team tried an innovative approach tailored for a patient as small as Mabel: “We had this interesting MacGyver idea,” Dr. Cook explains. “We put a guide wire through the gastric feeding tube, temporarily took out that tube, then put in a device to make the gastric feeding tube hole left behind bigger and used very flexible, tiny urinary endoscopes into the stomach, navigated up the esophagus—like a reverse gastro-esophagoscopy.”

Dr. Cook says it was only possible thanks to the hospital’s specialized equipment. “We have a hybrid endoscopy-fluoroscopy suite donated by the owners of a former canine patient.”

The suite includes both radiography (X-ray) and endoscopy and catheter capabilities in one room: “Someone runs the endoscope while someone else uses the X-ray to watch,” she says. Without the suite, such an intensive procedure in such a small patient might have been too difficult.

Against all odds, Mabel’s esophageal balloon was inserted, and Gina took her home for a new and even more complicated regimen of gastric feeding tube and twice-daily balloon expansion. Luckily, Mabel was very resilient. 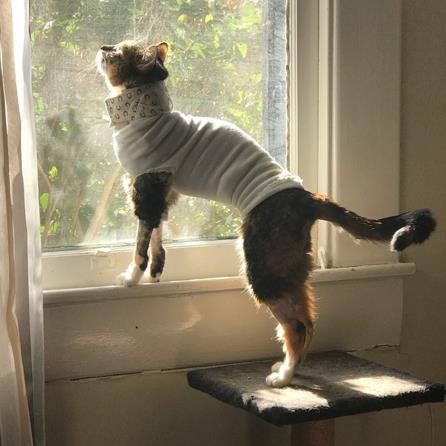 “She threw up once with the balloon, and then we were routinely doing feedings and balloon in the morning starting at 5:30 am, feeding in the afternoon, and feeding and balloon in the evening,” Gina says. “I was a complete zombie.”

Through it all,  Gina kept her hopes up that the feeding tube would come out and a new endoscopy would show that Mabel’s esophagus had widened.

On February 28, Mabel’s esophageal tube with the balloon was removed. The stricture was wider, and “the spot healed great,” Gina says. The little cat ate a bowl of very wet, liquid-y food for the first time in months.

Dr. Cook was impressed by Gina’s discipline and Mabel’s strength: “They’d been inflating twice a day that whole period, and when we took out the device, Mabel’s esophagus looked absolutely perfect, totally and utterly amazing.”

Mabel’s gastric feeding tube stayed in a little while longer to make sure Mabel was eating enough after the procedure. Eventually, in March, it fell out on its own, and veterinarians said it didn’t need to be replaced.

“That was the anticlimactic end to the story,” Gina says.

This past summer, Gina sent pictures to the teams at the emergency hospital and at Texas A&M of a happy, healthy little Mabel. She was the smallest patient the specialists at Texas A&M had tried the esophageal balloon procedure on, and Gina hopes the experience will help other small animals in the future.

Don’t be afraid to share just how stressed or overwhelmed you might feel dealing with time-consuming at-home treatments. Gina says, as the weeks wore on, she was finally upfront about how tired she was. 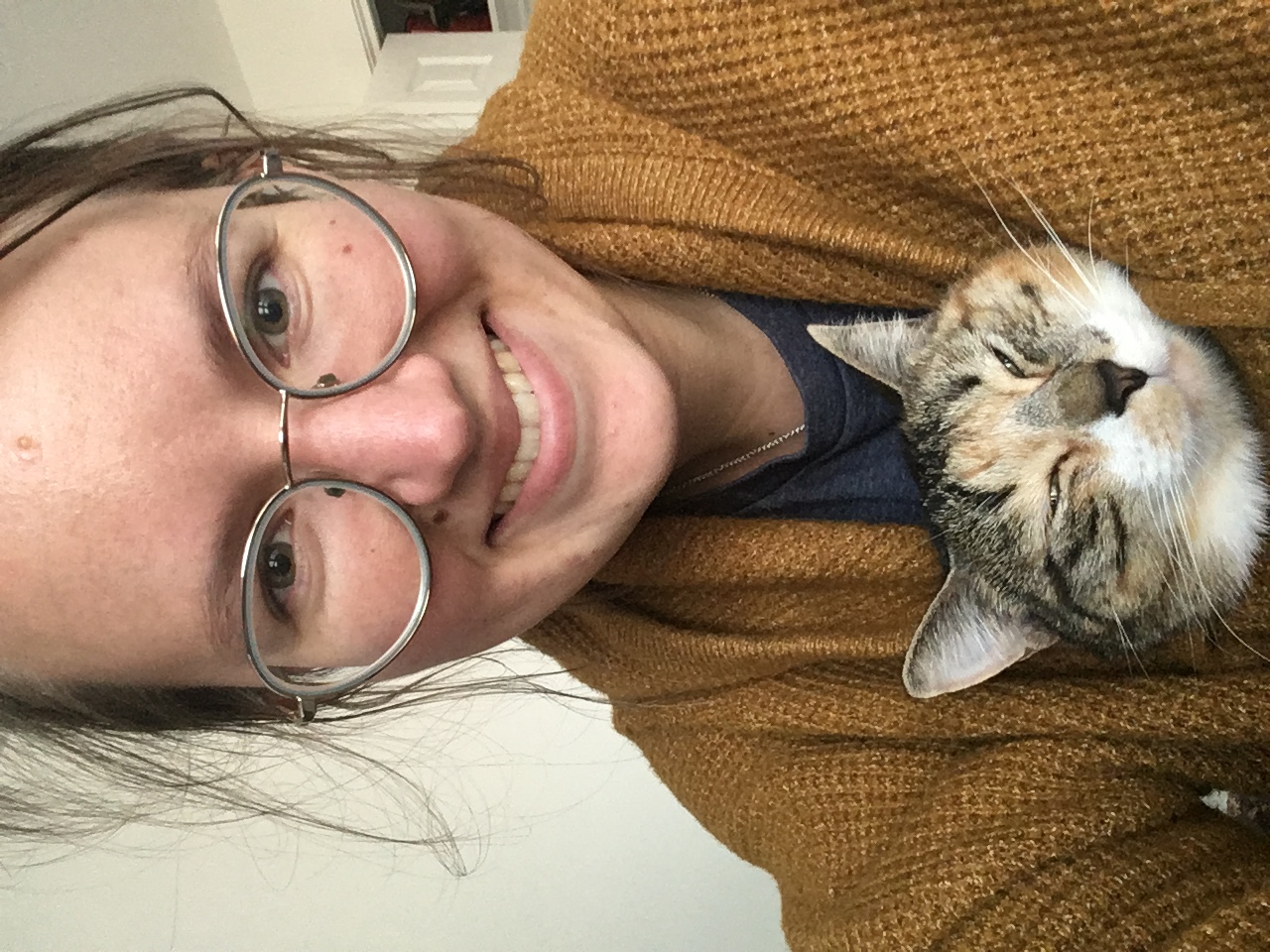 “I told them, I’m at my breaking point,” she says. “Early on, I just did whatever they told me, three times a day, eight hours a day, treatments at midnight, that’s what I’d do. I cried in front of a lot of veterinarians and veterinary technicians, and they were all very kind. They told me I was doing a good job, and that really helped.”

Ask questions of your general-practice veterinarians and of veterinary specialists, agrees Dr. Cook: “There may be treatment options you’re not aware of, and maybe the veterinarian you’re seeing isn’t either. Get as much information as you can before you make a big decision.”