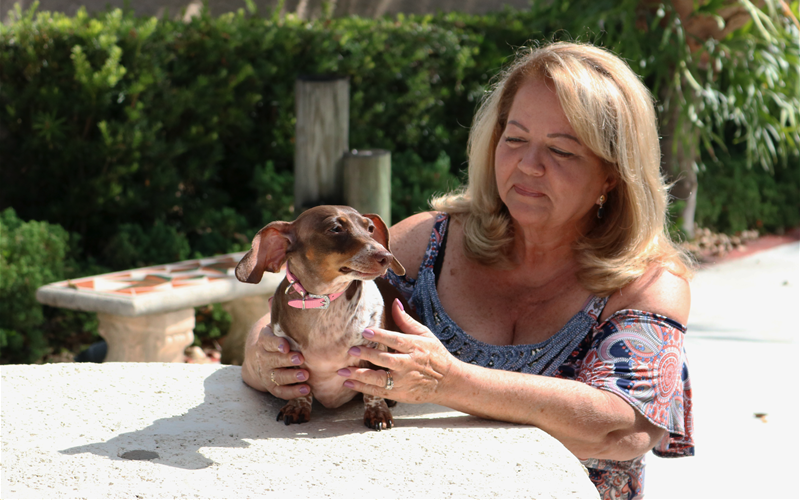 Miriam Rosario was used to seeing her dachshund run around “like a bullet” since she adopted little Sasha at three months old.

“You couldn’t hold Sasha,” Miriam says. “She jumped off the sofa. She ran up and down the stairs.”

The energetic dachshund, with the breed’s characteristic long back and short legs, loves to spend time with Miriam, her husband Felix, and their chihuahua, Mia. 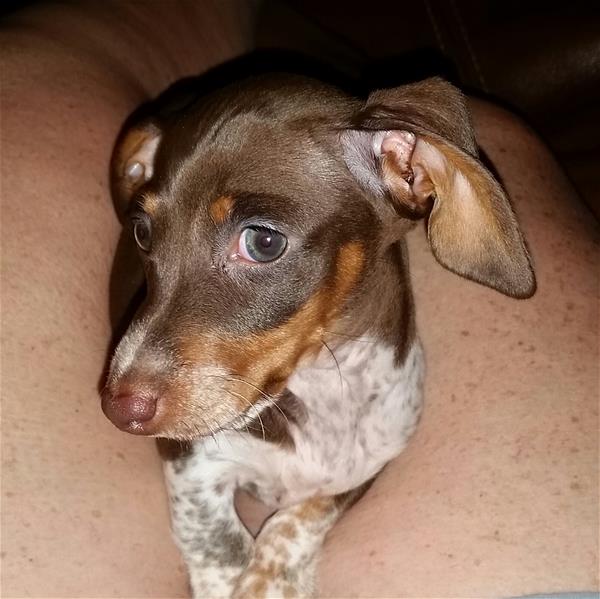 The only time Sasha really stops is when she’s frightened and hides under the sofa in their Miami home. That’s where Miriam says she found Sasha on the evening of Monday, July 15, 2019. But Miriam soon realized that this time it wasn’t just fear, but pain that was pushing Sasha into hiding.

“I came home from the office and she wouldn’t come out at all,” Miriam says. She lifted the sofa and found the two-year-old dog panting and trying to walk, with back paws unsteady and her toes “knuckling over.”

Felix was adamant that they take Sasha to the doctor right away, so Miriam called their family veterinarian, Dr. Jose Alonso at Isa Tamiami Animal Clinic, who told them that it sounded serious and that they needed to immediately head to an emergency hospital.

Miriam and Felix didn’t know it yet, but Sasha had suffered a slipped disc and was showing some signs of the most serious category of paralysis with Intervertebral Disc Disease (IVDD): inability to move or even feel the back legs and tail when pinched.

At the emergency hospital, a doctor quickly performed a physical exam of Sasha and told Miriam that the young dachshund might need immediate surgery. They were then referred to Southeast Veterinary Neurology, where Board-certified veterinary neurologist Dr. Michael Wong was ready and waiting that night to diagnose the problem and perform that surgery, if necessary. This was just two short hours after Miriam first noticed signs of pain and paralysis at home.

After taking a detailed history and doing a complete physical examination, Dr. Wong performed a neurological examination to determine whether the problem was indeed the nervous system, as well as where in the body and how severe the problem was. All this information helped the team narrow down the possibilities.

“Slipped discs are most common in dachshunds, but [there are cases of] meningitis, myelitis or inflammation of spinal cord or coverings,” he explains. Other possibilities included external injuries, tumors of the spinal cord, diskospondylitis (a bacterial or fungal infection of the discs) or even a fibrocartilaginous embolism (a kind of spinal cord stroke) can cause similar signs.

"Sasha came to us like most dachshunds do...walking one day, not walking the next day."

Dr. Wong recommended an MRI (magnetic resonance imaging) to definitively diagnose the spinal cord injury, and Miriam and Felix immediately agreed. The MRI confirmed IVDD, and Dr. Wong used an analogy to explain the basics of what had happened: Think of the spinal cord as a tube running from the brain down to the back legs. The spinal cord is surrounded and protected by hard bony vertebrae.  In between each pair of these vertebrae is an intervertebral disk, which is sort of like a jelly donut.  There is an inside jelly part and a more fibrous outer part of the disk. In certain breeds, like dachshunds and French bulldogs, the jelly loses its squishiness and becomes dry and brittle. That inner jelly disk material can burst out of the outer fibrous donut part and cause two types of injury.  First, the disk material hits the spinal cord at high speed, causing damage. Second, that disk material takes up space between the spinal cord and the bony vertebra, squeezing the spinal cord.  The combination of these two injuries causes symptoms ranging from pain to paralysis. 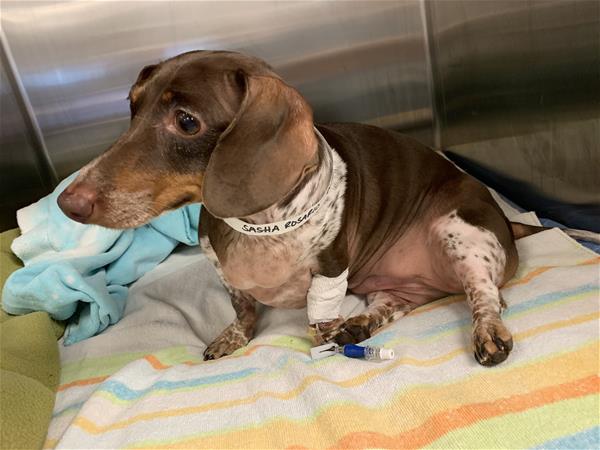 “Sasha came to us like most dachshunds do…walking one day, not walking the next day,” Dr. Wong says. Other times, the disease progresses slowly from painful walking to wobbly legs to paralysis over days or even weeks.

“Sasha was paraplegic with an absence of deep pain perception, unable to move her legs or feel them,” Dr. Wong says. “With these dogs, we pinch the toes hard to see if the dog can feel them, and we look for the dog to whimper, cry, turn or look at its tail. Sasha didn’t do that.”

Miriam says Dr. Wong was confident but honest about Sasha’s prognosis: “He told us there was a chance, even with surgery, that Sasha might need a wheelchair.” Only half of dogs who don’t feel their legs and undergo surgery regain their ability to walk, according to Dr. Wong.

Dr. Wong says he also told Miriam about the risk of myelomalacia, a softening of the spinal cord that can run up and down the spine: “The spinal cord starts dying.” Myelomalacia shows up in 10% of dogs who fall into Sasha’s most severe category of paralysis and numbness.

Dr. Wong made sure to communicate to Miriam how crucial timely surgery was: Most studies show that the best results come when surgery is performed within 24 hours of injury.

Miriam was “scared and in shock” at the prospect of surgery.

“It’s just like a person in the hospital,” she says. “I didn’t know if she was going to wake up from anesthesia or something was going to be wrong. Would she be able to walk and have normal activities like before?”

Ultimately, though, these crucial conversations with Dr. Wong that night in the heat of the moment helped Miriam and Felix decide to go ahead with surgery.

“They gave us confidence at the hospital, with all the explanations along the way from doctors and technicians,” Miriam relayed. Dr. Wong says he and his team try to slow things down for clients and make sure pet parents understand the condition, the diagnostic procedures and the possible outcomes. He knows clients may never have visited a neurologist or other veterinary specialist before.

“Their loved one is sick or in pain, and they don’t know what to do,” he says. “We make it a point to put ourselves in their shoes and remember that we’ve seen this a thousand times, but this is their first time.”

Dr. Wong performed a laminectomy that night, cutting a “window” into the vertebra around the spinal cord and removing the disc inside that was putting pressure on the spinal cord. In Sasha’s case, the work was done at a spot right where her ribs meet her waist. Blood flow improves and, ideally, feeling and movement return to the affected parts of the patient’s body.

“Not every dog with a slipped disc needs surgery,” Dr. Wong says. “Many times, we can manage mildly affected dogs with medicine and rest.  But if there’s paralysis, if the pain or wobbly walking isn’t improved by medicine or rest, if symptoms are getting worse and not better, or if the pain recurs after treatment, surgery is recommended.”

Miriam got a call before 3:00 am the next morning that the surgery had gone well and Sasha was recovering. The dachshund would go on to stay six days after surgery, “a typical amount of time for a dog without deep pain perception,” Dr. Wong says. 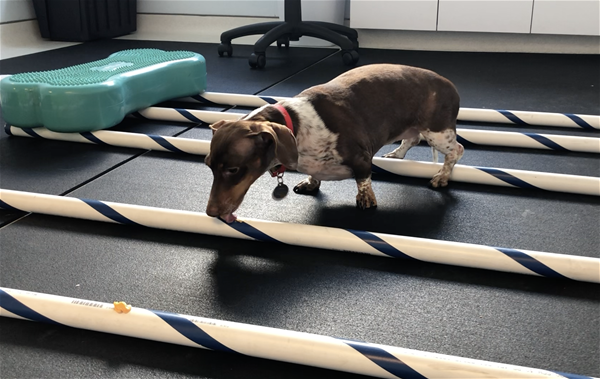 Sasha received physical therapy every day while hospitalized, then 10 sessions of therapy after discharge. This gave team members an opportunity to watch her recovery and make sure there were no signs of myelomalacia. Thankfully, Sasha showed improvement right on schedule.

During Sasha’s hospital stay, team members called morning and evening to let Miriam know how Sasha was doing: “They kept me updated. They gave me even more attention than a human hospital. Nobody calls me twice a day from a human hospital to tell me how people are.”

After her postsurgical stay at Southeast Veterinary Neurology, Sasha returned home for cage rest, with 90-95% of each day sitting as quietly as possible and letting her body recover. Breaks were only for food, potty and three-times-a-day at-home physical therapy.

“I would lay her on a pad and lift her legs in the back and do a bicycle motion,” Miriam remembers. As her ability to move returned, Miriam says she’d get Sasha to run around the sofa a little with treats as a reward.

Sasha came back to Southeast Veterinary Neurology about two weeks after surgery to have her stitches removed.

“That’s when we check that things are going OK,” Dr. Wong says. “Dogs graduate from crate rest to moving around a room in the home.”

"This isn't surgery where your dog is walking the next day. It takes time and patience."

Dr. Wong says that different neurologists using their own experience may prescribe more or less hospital time after surgery or more or less crate rest. The hospital team also kept up twice-daily phone calls to check on Sasha’s condition, with visits to the physical therapy team twice a month for six months for more extensive exercises, like jumps over sticks.

Sasha progressed well, according to Dr. Wong. She went from not being able to move her legs and wag her tail to doing both, and eventually returned to peeing on her own without needing Miriam to gently press her bladder when she needed to go. Strength and coordination returned, and wobbly legs and feet got better at moving again.

“This isn’t surgery where your dog is walking the next day,” Dr. Wong says. “It takes time and patience.”

When hospital physical therapy visits were finished after six months, Miriam kept up the at-home exercises, on doctor’s orders, until a year after the surgery.

Today, Miriam says the now-four-year-old Sasha only shows a slight limp on her left back leg. 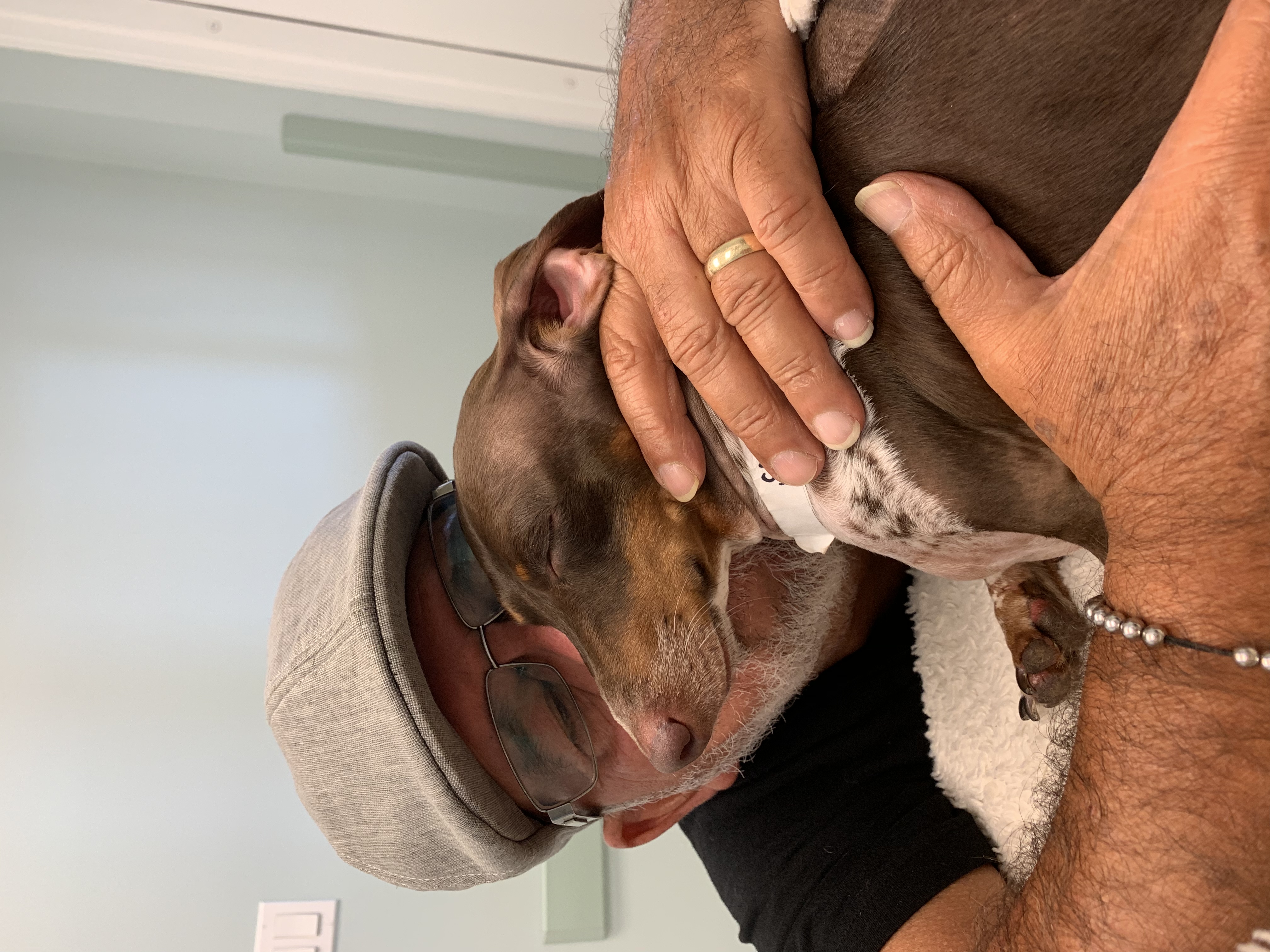 “She walks. She runs. She’s perfectly fine,” says Miriam. “She’s learned not to go up and down the stairs or jump up and down from the sofa without our help.”

“She regained the ability to walk and live life as if nothing happened,” he says. Sasha’s pet parents as well as her primary care veterinarian will still keep an eye out for future back or spinal problems, as dachshunds, French bulldogs and other “slipped-disk-prone” breeds are at risk for problems in the future.

Miriam and her husband both think they made the right choice to treat Sasha, a young dog with so much life ahead of her.

“It was a learning experience,” she says, as neither of them had known veterinary neurologists even existed. Now, they’re glad to know that veterinary specialists are out there and are ready to seek out help if they need to.

“Sasha was just a baby. Just two years old. My husband was even more decided than I was [about doing the surgery],” she says. “He says he wouldn’t think twice about it. He’d do it again.”Video courtesy of Southeast Veterinary Neurology. Photos courtesy of Miriam Rosario.
Find a veterinary specialist in your area