As the owners of a sprawling cattle ranch outside of Houston, Texas, Tammy Canton and her husband Ren were no strangers to the unique challenges of raising cattle. Having raised and cared for hundreds of Red Angus, Charolais, Maine Anjou and more, the couple was familiar with many of the common ailments and injuries that affect the bovine species. In 2017, Tammy and Ren had even taken in a bottle calf that nearly drowned in the floodwaters of Hurricane Harvey and nursed her back to health in the laundry room of their home. The experience raising the calf, lovingly named Harveigh, taught the duo to be ready for just about anything when it came to life on the ranch.

One hot summer day in July of 2018, as she gazed out across the 20 acres of pasture, Tammy’s eyes landed on something dark and unmoving laying in the dirt. Though to her knowledge none of their cattle were pregnant, the dark object appeared to be a dropped calf lying alone in the scorching heat. Tammy rushed out of the house and up to the extremely small and limp newborn calf’s side. “He was teeny-tiny,” Tammy recalls. All black with a white face and curled up in the dirt, the little animal was unable to even lift his head.

With no mother in sight, Tammy surmised that the calf had been abandoned and knew she had to act fast. In raising and caring for Harveigh a year prior, she had become a regular at the nearby Texas A&M Large Animal Teaching Hospital and decided to take this calf there for help. Knowing time was of the essence, Tammy quickly loaded the calf into the back of her Ford Expedition and hit the road towards College Station.

Photos of Harveigh, the calf born during Hurricane Harvey in 2017 that Tammy and Ren nursed back to health in their home. Source: Facebook

As her SUV flew down the highway with the weak newborn calf swaddled up in the back, Tammy silently told herself to prepare for the worst. “I was very anxious and worried about opening my heart to him if he didn’t have any shot at life,” she explains. After sadly losing her beloved Harveigh just two months earlier to liver failure, Tammy was “filled with anxiety” and hesitant to become attached to another calf that might not make it. Still, she drove on – determined to give this tiny creature a fighting chance.

At the Large Animal Teaching Hospital, they were met by Dr. Evelyn MacKay, a Board-certified Large Animal Internal Medicine specialist who had worked closely with Tammy on Harveigh’s rehabilitation and care. Dr. MacKay quickly assessed the calf and confirmed that he was likely only a day old and had been born prematurely. “While most beef calves are born weighing around 60 to 70 pounds, this calf weighed under 50, which was not a good sign, to say the least,” Dr. MacKay explains.

On top of his prematurity, Dr. MacKay recognized that the calf was suffering from what is known as failure of passive transfer, a condition which occurs when a newborn calf fails to obtain adequate quantities of immunoglobulins from its mother’s colostrum, or first milk, after giving birth. Unfortunately, failure of passive transfer immunity, or FTPI, is a major cause of infectious disease and mortality in neonatal foals and calves, as it leaves the newborn with an extremely vulnerable and undeveloped immune system with no experienced maternal antibodies to ward off the environmental infectious agent. 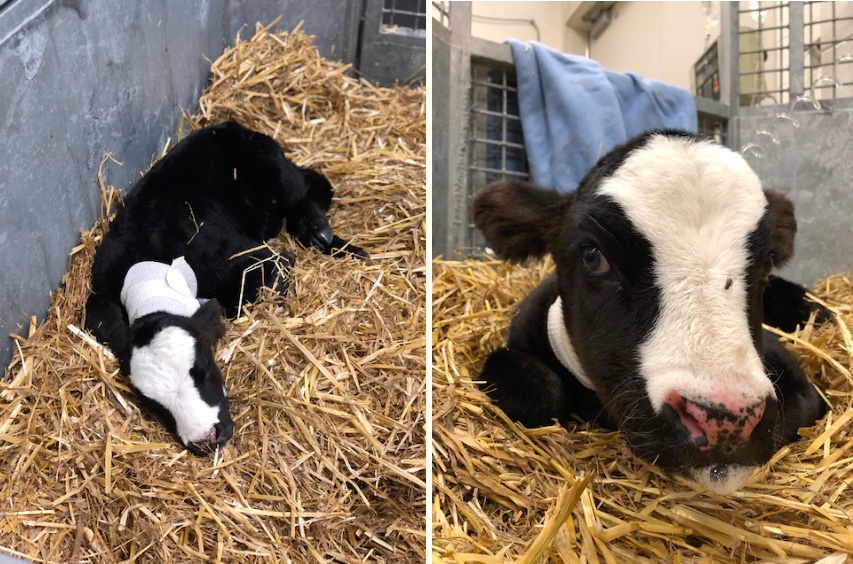 The newborn calf spent a total of 10 days recovering in a specialized pen at Texas A&M’s Large Animal Teaching Hospital.

Though she was reluctant to leave his side, Tammy ultimately decided to leave the calf in the expert care of Dr. MacKay and her team of residents and fourth-year veterinary students at Texas A&M. “I was extremely nervous, but I felt an overwhelming obligation to give the calf a shot at life,” she explains. As she made the journey home alone, Tammy continued to brace for the worst in case the little guy did not pull through.

Initial blood work confirmed the calf was dangerously dehydrated and already septic, losing the battle against widespread systemic infection. Dr. MacKay performed a plasma transfusion and started IV antibiotics and supportive care – doing all that she and the team could to support the calf through this most critical period. “He was like a limp dishrag for the first 24 hours,” Dr. MacKay recalls. “We weren’t sure if he was going to rally.”

After about 24 hours at the hospital, the calf finally began to show slight signs of improvement. Now able to sit up on his own, the little black and white newborn learned to nurse from a bottle and began attempting to shuffle around in his stall. Dr. MacKay called Tammy to let her know that although they were still far from smooth sailing, the calf had a fighting spirit and was growing stronger every day.

On July 28, after 10 days of ongoing supportive care at the teaching hospital, the calf was discharged from Texas A&M. Out of gratitude for the first-class medical care and personal attention he had received there, Tammy decided to officially name the calf “Houston MacKay” in Dr. MacKay and the team’s honor. “They’re just amazing people,” she reflects. 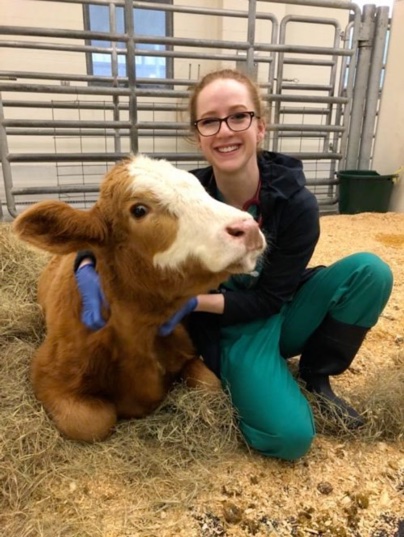 Back at the ranch, Tammy and Ren had prepared a specialized pen in their barn for Houston. Outfitted with an AC unit, a video camera for monitoring and chicken wire to keep him secure, the pen was designed to give him his best shot at life going forward. The couple began Houston on a regular bottle-feeding routine, administering a bottle every 12 hours on the dot to help him grow stronger. “I made sure to do everything by the book to give him the best chance I could,” says Tammy.

Though he was now much healthier, he was still smaller than Tammy and Ren’s dogs. Not discouraged by his size, though, Houston was eager to socialize – befriending every human and dog he came into contact with. Though he was still separated most of the time from the other cattle for his safety, Houston offered them sloppy tongue kisses through the slats in the fence whenever they came within licking distance. “He was all boy,” Tammy recalls. “He would shove every gate with his head.” Houston’s playful and rambunctious personality endeared him to everyone on the ranch and quickly earned him a special place in Tammy’s heart. “He just brought life back out here,” she recalls. “He was just so adorable and he had no fear of anything.”

By September of 2018, another calf had been born on the ranch to a very gentle Red Angus cow named Roxy. Knowing Roxy’s calm disposition, Tammy decided to let Houston into the pen with the mother and her newborn calf, named Dallas. As she had hoped, Roxy seemed to adopt Houston as her own and let both calves nurse at the same time. “It was the best thing that could have happened,” Tammy says. Though she didn’t have to, now that he was nursing from Roxy, Tammy continued to occasionally offer a bottle to Houston, who would always come running enthusiastically for the welcome treat. The pair enjoyed this bonding ritual for four months as Houston grew bigger and stronger – eventually becoming the biggest steer on the ranch and able to socialize freely with the rest of the couple’s cattle.

Houston was eager to make friends with the couple’s dogs and often stole kisses from the other cattle through the fence.

Throughout their journey with Houston, Tammy and Ren stayed in close contact with Dr. MacKay, sharing frequent updates and occasional concerns. “I stayed in touch with her constantly,” Tammy says. “I would send her pictures or texts whenever something looked weird or if I wasn’t sure about it.” When Houston was around three months of age, he and Dr. MacKay reunited when she came out to the farm with a group of fourth-year veterinary students to vaccinate and castrate him and his adopted brother, Dallas. “He really pulled through his sickly bottle calf days and kept on soaring,” Dr. MacKay says of the now large steer. She also uses Houston as an example in one of her lectures at the Teaching Hospital about failure of passive transfer immunity. “Looking at him as an adult and comparing him to (Dallas) who had a normal life, you wouldn’t be able to tell he was the one who had a really rough start. He was a pretty remarkable success story.”

Not only grand in size, Tammy describes Houston as having a big heart and a gentle spirit. “Having his hair done is one of his favorite pastimes,” she explains. “He will come running to have me brush him when I pull out the grooming supplies.” In fact, Houston – now three years old – still comes running when he is called. He is known for giving you “sweet eyes” and will rest his huge head on your shoulder for pets. The gentle steer also enjoys giving children of family and friends the occasional ride around the pasture. Since his time as a sickly newborn clinging to life, Tammy says Houston has been completely healthy. “I am just shocked and floored that he’s been so healthy,” she reveals. “The odds were totally stacked against him and he never once had a setback."

Houston with some of his many human friends. Source: Facebook

Tammy’s advice for animal owners considering seeking specialty care is to “go for it,” even if, as with Houston, there is only a glimmer of hope. “Getting second opinions, educating oneself and simply learning what therapies are available are a great starting point when you don’t know where to turn,” she explains. When it comes to her experience with Large Animal Internal Medicine specialist Dr. MacKay, Tammy says the open dialogue was just as important to her as Dr. MacKay’s expertise.

“The relationship I forged with Dr. MacKay is something invaluable. She prevented me from ever feeling like a bystander to what decisions were made.”

Thinking back to that July day in 2018, Tammy is so thankful that she took the chance and opened her heart to the tiny, abandoned calf – now an irreplaceable member of the family and beloved among friends and neighbors as well. “I have a friend whose son is autistic, and he really wanted to see a cow,” Tammy recalls. “I put him in the pen with Houston and Dallas and he was able to stand in there and brush their hair and they were just so gentle. It was the best day ever for that kid, and it was because of Houston and his gentle spirit.”

Tammy and Ren started a foundation called “Harveigh’s Heroes” in memory of the special calf they lost to liver failure in order to help families who are not able to afford specialty care. Tammy wants to spread the word about the availability of large animal specialty medicine, as she is sure that without it, she would not have the big steer who she calls “the sweetest boy” in her life today. “He trusts me,” she says. “He knows he is loved.”

You can keep up with Houston, Dallas and the rest of Tammy’s animals on her Facebook and Instagram pages.

Do you have a story to share? Submit it here!