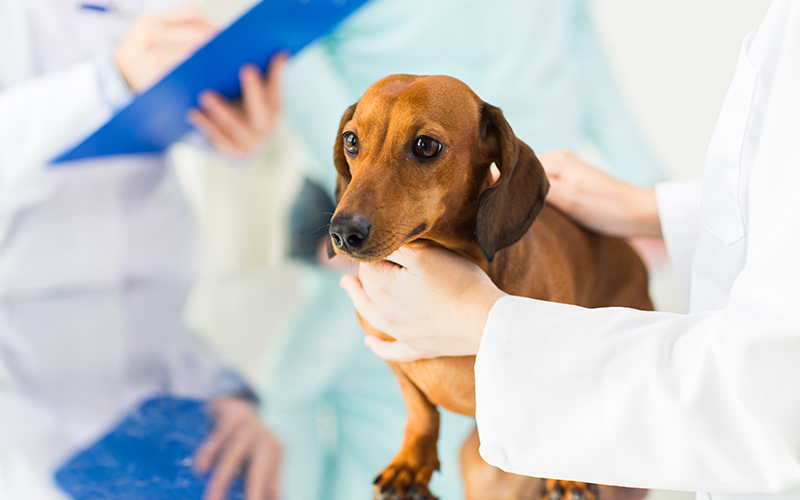 What is myasthenia gravis?

In most cases, myasthenia gravis (MG) is a disorder that develops due to an immune system attack (autoimmune) against the acetylcholine receptor. This prevents the energy packets (acetylcholine) from attaching to the receptor, causing muscular weakness and excessive fatigue. This may affect muscles associated with the eyes, face, throat, esophagus or legs. The disease process is known to develop in two different groups of patients; very young dogs and older dogs.

What are the signs of myasthenia gravis?

Clinical signs can be limited to only one muscle group or affect the entire body and can include:

In a few breeds, congenital myasthenia gravis can occur, which means it is present at birth. In most cases, this results in a fatal disease process in which treatment with typical medications does not result in improvement. The exception to this is miniature dachshunds, which are the one breed that can show improvement with age if they are diagnosed with congenital myasthenia gravis.

How is my pet diagnosed with myasthenia gravis?

The gold standard for the diagnosis of immune-mediated MG is through a blood test called the Acetylcholine Receptor Antibody titer. This test checks for autoantibodies against muscle acetylcholine receptors. Only a few pets (approximately 2% of dogs with generalized MG) will have a false negative, and a false positive is extremely rare. This means the test is very sensitive at detecting the disease and very specific to this disease process. It is important to remember that we can’t correlate the amount of antibodies with the severity of the disease, so treatment should be continued as long as the titer result comes back positive.

What happens if my pet is diagnosed with myasthenia gravis?

Your veterinarian or veterinary neurologist will likely recommend that chest x-rays and an abdominal ultrasound be performed to check for other disorders. Other blood tests, such as a CBC or thyroid panel may also be recommended.

How is myasthenia gravis treated?

Currently, treatment is focused on elimination of clinical signs with an anticholinesterase agent called Mestinon (pyridostigmine). This drug slows the breakdown of acetylcholine, allowing the energy packets to hang around longer in the neuromuscular junction to stimulate the muscles.  In some cases, an optimal response is not obtained with Mestinon alone and immunosuppressive medications, such as steroids, cyclosporine, azathioprine, etc., are added.

How long will my pet need treatment for?

Currently, literature states that 90% of dogs entered clinical remission around 6.4 months after diagnosis (range 1-18 months). Unfortunately, those that did not enter remission eventually developed cancer 1-3 years after diagnosis. The most important factor in obtaining a good clinical outcome is most cases is an early and accurate diagnosis.

What are risks of myasthenia gravis?

One of the biggest risks of acquired MG is the development of aspiration pneumonia secondary to megaesophagus. Patients with MG should be closely monitored for signs of pneumonia, including:

Pets with myasthenia gravis should be fed in an inclined or upright position and should stay in that position for 10-15 minutes after any feedings or medication administration to reduce the risk of regurgitation and aspiration. Even with spontaneous remission of acquired MG, not all dogs experience resolution of their megaesophagus. Therefore, pets may need to continue upright feedings for the rest of their life, even after completing treatment for MG.

Unfortunately, a severe form of MG called acute fulminating myasthenia gravis has been described. These pets have a rapid onset of megaesophagus, rapid progression to full body weakness, and respiratory failure. Acute fulminate myasthenia gravis is associated with a high mortality rate.
Find a veterinary specialist in your area