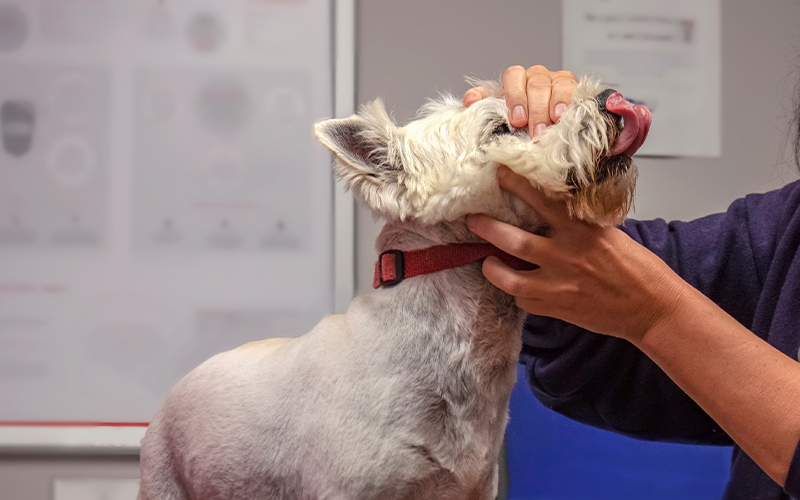 What is Addison’s disease?

Addison’s disease is a disorder caused by a deficiency of two hormones called cortisol (a stress hormone) and aldosterone (a hormone which regulates electrolyte and water balance in the body). Both cortisol and aldosterone are produced by the adrenal glands, which are located inside the abdomen, near the kidneys.  This disease is most often caused by immune-mediated destruction of the adrenal glands. Dogs are most commonly affected.

What are signs that your pet has Addison’s disease?

When Addison’s disease occurs, it usually affects young to middle aged female dogs, although any dog at any age can be affected. Certain breeds, such as the Standard Poodle, Portuguese Water Dog, and West Highland white terrier, are at an increased risk of developing this disease.  Symptoms vary and can involve several body systems.

The signs of the disease can be intermittent or occur suddenly. Because the symptoms of Addison’s disease mimic other problems and often respond temporarily to supportive treatment, it may be difficult to recognize the diagnosis.

How are dogs diagnosed with the disease?

A marked increase in potassium and a decrease in sodium are seen in patients with aldosterone deficiency, while other, less specific, findings on routine blood work may include changes in the white blood cell count, decreases in blood proteins, blood sugar, and cholesterol or increases in kidney values. Definitive diagnosis is made using an ACTH stimulation test.  This blood test uses a hormone (i.e. ACTH) to stimulate the adrenal glands to produce cortisol.  In a patient with Addison’s disease, the adrenal glands can’t respond, and the cortisol levels are very low or absent.

What are the treatment options?

The prednisone dose may need to be increased during times of stress, such as veterinary or grooming appointments, travel, or moving.  Prednisone should be given every day to control the disease.

The prednisone dose is generally adjusted based on clinical signs.

Signs of prednisone deficiency include:

Signs of prednisone excess include:

Fludrocortisone must also be given daily, while DOCP is usually administered every 3-4 weeks. Dogs receiving either fludrocortisone or DOCP should have electrolyte (sodium, potassium and chloride) values checked frequently by their veterinarian until a stable maintenance dose has been determined for the dog. The dose and/or frequency of both these drugs may need to be adjusted based on electrolyte monitoring under veterinary supervision.

What is the outcome after treatment?

Hormone replacement therapy is a life-long requirement for dogs with Addison’s disease. As long as the dog is receiving hormone replacement therapy, their quality of life is excellent.  Anything that prevents the medications being given, such as misplacement of the medications or illness, must be considered an emergency. In times of illness, the patient may not be able to take pills and cannot compensate for the stress of the illness, which can lead rapidly to an Addisonian crisis.
Fortunately, the prognosis for Addison’s disease is generally excellent.  Most patients with Addison’s disease lead full and long lives.