What is Hypertrophic Cardiomyopathy (HCM)?

Hypertrophic cardiomyopathy (HCM) is one of the most commonly diagnosed heart diseases in cats. This disease is characterized by an abnormal thickening (hypertrophy) of one or several areas of the walls of the heart, usually of the left ventricle. Hypertrophic cardiomyopathy is also present in humans and is caused by a variety of genetic abnormalities of the cardiac muscle proteins.

In cats, this disease is more prevalent in Ragdolls, Maine Coons, oriental breeds (Himalayan, Burmese, Sphynx, Persians) and Devon Rexes, but it is also commonly diagnosed in Domestic Short Hair cats. A specific genetic defect has been identified in Ragdolls and Maine Coons involving a muscle contractile protein: the myosin binding protein C. This disease is usually diagnosed in middle-aged cats. However, there is also a juvenile form affecting young cats (usually Ragdolls).

What happens in a cat with HCM?

The impact of the thickening of the ventricular wall on heart function is quite variable. If the hypertrophy is mild and focal, the cat may remain symptom-free for all its life. However, if the hypertrophy is severe, the heart muscle will have a hard time relaxing, which leads to increased intra-cardiac pressure and congestive heart failure (CHF). In cats, heart failure results in fluid build-up in or around the lungs.

In some cases, the ejection of blood from the left ventricle can be disrupted because the mitral valve moves abnormally against the inner wall of the ventricle (the septum) thus partially obstructing the exit of blood out the aorta (large vessel supplying the body). This phenomenon is called DOLVOT (Dynamic Obstruction of the Left Ventricular Outflow Tract) (Figure 1). In humans, this is associated with an increased risk of sudden death.

Other complications of this disease include cardiac arrhythmias and clot formation in the left atrium. If a clot forms, it may break apart, travel in the aorta and block a major artery, such as the one supplying the hindlimbs. This phenomenon is called FATE (Feline Arterial ThromboEmbolism) and is a medical emergency. This disease can be progressive: with time, the left ventricle may dilate and its contractility (pumping function) may decline. Lack of blood flow to the heart muscle may then result in cardiac muscle destruction and end-stage heart disease.

What are symptoms of HCM?

Many cats with HCM are asymptomatic meaning they have no clinical signs. The disease may be discovered when listening to the heart and abnormalities such as a heart murmur, arrhythmias and/or extra heart sounds (gallop rhythm) are heard. Other animals may have HCM screening by a Veterinary Cardiologist (see below under screening) when abnormalities are detected.

When CHF occurs, fluid can build up in the lungs (pulmonary edema) or around the lungs (pleural effusion).  This can result in a variety of symptoms such as:

It is not uncommon to see the symptoms of CHF triggered by an event such as anesthesia, IV fluids, steroid administration or stress.

With FATE (Feline Arterial ThromboEmbolism) there is sudden onset paralysis (loss of motor function) of one or several legs (hind legs or right front leg) (Figure 2). The affected leg becomes limp and is dragged. The extremity of these legs becomes cold and pale and the cat is often painful. 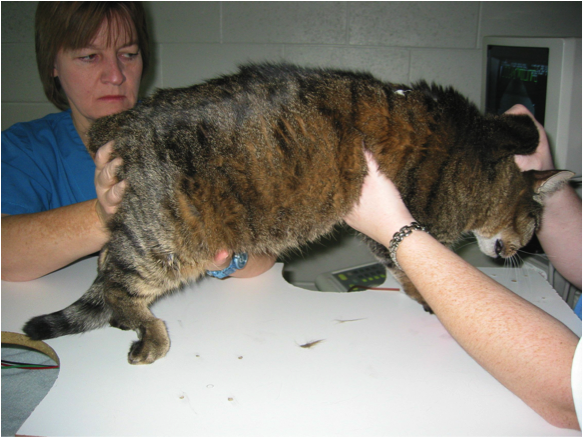 Figure 2: Arterial thromboembolism (FATE) in a cat with HCM. A blood clot originating from the heart has obstructed the distal aorta, blocking blood flow to the hind limbs. His hind legs are paralyzed with inability to correct the position of his paws (knuckling). (Photo: Eric de Madron)

How is HCM diagnosed?

The diagnosis of HCM relies on the measurement of the ventricular walls by cardiac ultrasound (echocardiography) and the exclusion of other non-genetic causes of hypertrophy such as hyperthyroidism and systemic hypertension (high blood pressure). Other testing may include chest radiographs (x-rays), electrocardiogram (ECG), blood pressure measurement and blood tests.

The goal of the Veterinary Cardiologist is not only to diagnose HCM, but also to establish risk factors to separate cats at low risk from cats at high risk of developing sudden death, CHF or FATE. This helps guide medication or treatment recommendations. Furthermore, periodic reassessments are required because of the progressive nature of some cases of HCM.

What are screening tests for HCM?

How are cats with HCM treated?

In asymptomatic cats, no treatment has been proven to change the natural progression of the disease so far. However, there are some theoretical grounds behind the use of beta-blockers to lessen the DOLVOT when present. In people, this has been shown to reduce the risk of sudden death. In cats, this has not yet been proven to be of survival benefit.

If a cat is thought to be at increased risk of FATE, the risk can be reduced by use of blood thinners such as Clopidrogrel (Plavix).

If a cat is in CHF, medications such as diuretics (furosemide or torsemide) and ACE-inhibitors (Enalapril, Benazepril) become required. Other medications stimulating contractility such as Pimobendan can be considered in selected cases.

What is the prognosis for cats with HCM?

The prognosis for cats with HCM is quite variable and depends on the pattern of abnormalities present in the heart, the heart rhythm, and blood pressure. Cats with very stiff ventricles, very large atria, arrhythmias, and low blood pressure have a poor prognosis. Juvenile forms of HCM that are rapidly progressive also carry a poor prognosis.

On the opposite end of the spectrum, cats with mild and focal hypertrophy without other major cardiac abnormalities may live a completely normal life.