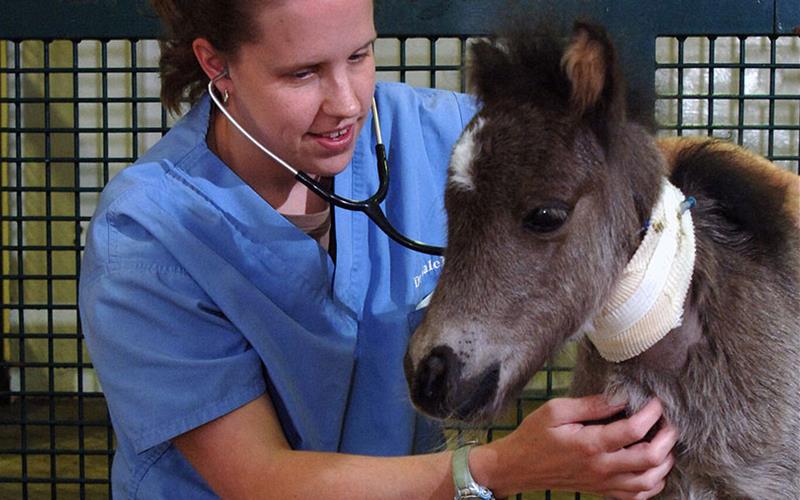 What is neonatology and neonatal sepsis?

When foals are first born, there are multiple events that MUST occur to ensure that the foal has adequate protection against all of the germs in its environment. Not only are there certain milestones that a foal must reach shortly after birth (such as standing within 1 hour and nursing within 2 hours), but there are critical things that must occur before the mare even goes into labor.  If the mare is sick during, or shortly after her pregnancy, the overall health of the foal can be affected which makes them more prone to disease, specifically neonatal sepsis (overwhelming bacterial infection).

Sepsis is one of the most common causes of sickness and death in very young foals and often occurs in conjunction with other diseases like a ruptured bladder, diarrhea, or hypoxic ischemic encephalopathy (dummy foal syndrome). A young foal develops sepsis when they are exposed to bacteria in their environment to which they cannot mount an appropriate immune response. Once infection has developed, the body can overreact in its efforts to fight the bacteria which causes the foal to become very ill. Ultimately, sepsis can lead to multiple organ failure and death.

In order for a foal to have adequate antibodies (a working immune system), they must drink good quality colostrum from their mother within six hours of birth. Colostrum is the mare’s first milk that is full of rich nutrients and antibodies. The antibodies give the foal immunity against organisms in its environment. After 12-24 hours, the foal’s gut begins to close, and it can no longer absorb the antibodies it needs by drinking. Mares should be vaccinated one month prior to foaling so that they have high levels of antibodies in their blood to deposit in the colostrum.

A number of things can happen that decrease the chances of a foal receiving the antibodies that it needs including:

What signs may indicate a foal is suffering from sepsis?

How is sepsis diagnosed?

Sepsis is diagnosed by your veterinarian based on a scoring system that was developed to take into account a number of factors such as:

These factors all weigh heavily towards a positive diagnosis of sepsis. Other changes that count towards a high sepsis score include:

How is a foal with FPT and sepsis managed?

Treating a septic foal can be labor intensive and expensive. Many septic foals require around the clock support with nasogastric tube feeding and IV (intravenous) fluids as well as plasma transfusions and IV antibiotics. Foals that develop joint infections may also require surgical joint flushes in order to give them the best chance of being sound in the future. If foals recover, they are often placed on antibiotics for a few weeks to a month, depending on the severity of their illness. After the course of antibiotics, most foals do not need any additional therapy once they have recovered. They may, however, still be at risk for development of septic arthritis after their initial recovery.

What is the prognosis of a foal with neonatal sepsis?

The prognosis for foals with neonatal sepsis is fair with approximately 30% of these foals not surviving.  Foals that develop sepsis may survive the sepsis, but often succumb to septic arthritis, which can result in catastrophic and career ending lameness. Huge strides have been made in recent years to improve the care that septic foals receive, and with appropriate and timely medical attention, many of these foals do survive and can have long, full lives.