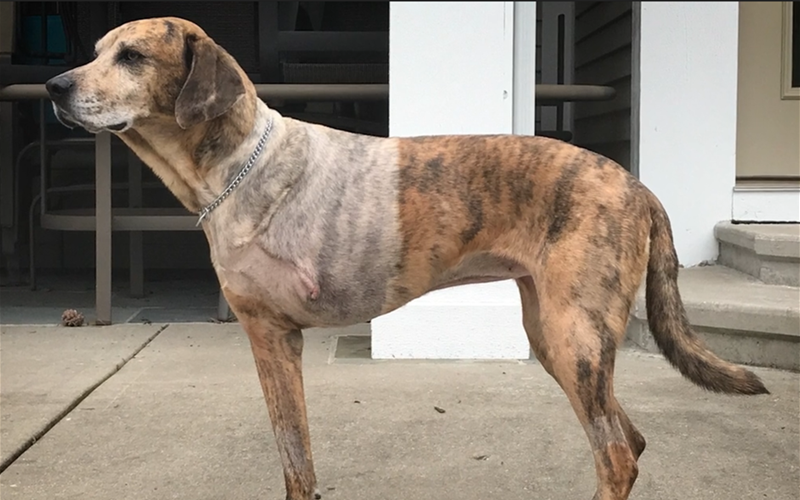 From a window in their home in Grand Rapids, Michigan, Denise smiles inside and out as she watches Penny, the family’s unapologetically enthusiastic 10-year-old Plott Hound, chase a raccoon trespasser who dared encroach upon their yard’s perimeter. Though you wouldn’t know it, from her zest for life and how quickly she rounds corners, Penny is a cancer survivor—and only on three legs.

Penny’s story started when she was just a year old at an animal shelter. She was waiting for her future family, until one day in 2011 when the wait finally ended. Penny trotted out of the shelter, led by Denise and her husband, who happily loaded her up into their vehicle as if she had done so a thousand times before. Penny had found her forever family. 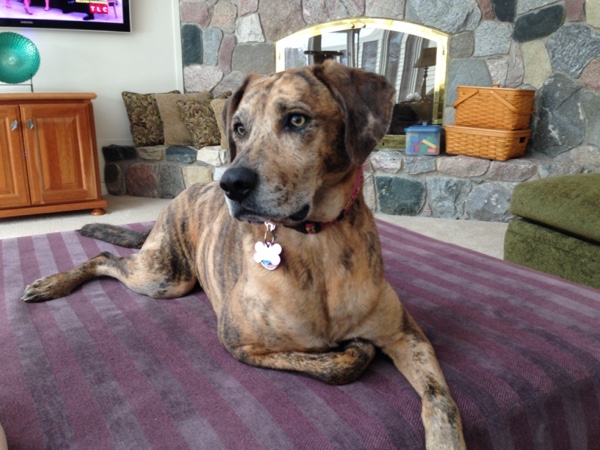 It was during an icy spell in February 2017 when Penny’s mom, Denise, first noticed a limp in Penny’s gait. Denise immediately took Penny to the family vet, Dr. Sherry Anderson of Cascade Animal Hospital. Dr. Anderson’s x-rays revealed what no dog parent ever wants to hear: the limp on Penny’s left front leg was not a simple sprain from playing too hard on the ice, but instead was caused by bone cancer. Though the news was jarring and hardly seemed like reality at this point in their journey, Denise and her family wasted no time. At the recommendation of their family vet, they sought the expertise of a Board-certified veterinary oncologist, Dr. Christine Swanson. Before they had even sorted through their own confusion and fears, Penny was evaluated by Dr. Swanson and her team at Blue Pearl of Grand Rapids.

Denise and her husband say that they felt not only listened to, but heard by Dr. Swanson.

Though initially unsure  what to expect at a veterinary specialist visit, they found the experience to be entirely personalized and one that moved at a pace they were comfortable with. Even the process for reaching the diagnosis was customized. Traditional protocol dictates that when a bony lesion is identified upon x-rays (radiographs), it is typically recommended to biopsy the mass to get an exact diagnosis, as that is what is required to examine the tumor on a cellular level and properly identify it. But realizing every pet and family is unique, Dr. Swanson presented all angles of the diagnostic routes they could take and was forthright in the pros and cons. Not only would a biopsy procedure require removal of a small sample of the bone, it also required anesthesia and would cause significant pain afterwards, as bone pain can be controlled less than soft tissue pain. Most significant for Denise and her family was that the biopsy would not change the next course of action, no matter what it revealed. It was clear from the radiographs that the leg would need to be amputated because of the destruction of the bone caused by the tumor.

Together, Penny’s family and Dr. Swanson decided to move forward with the amputation and have the tumor evaluated after the leg was removed to avoid a second, unnecessary surgical procedure and associated pain. Denise explains this was just the beginning of the personalized care that Penny received from Dr. Swanson and her team, with Penny’s health and happiness always taking priority.

The day of the surgery arrived the following month, and despite her understandable apprehension, Denise recalls the day’s events with a hint of humor in her voice. She was amazed at how seemingly unaffected Penny was by the amputation of her limb and chuckles at herself for her own anxieties about how Penny would adapt to having only three legs.

According to Denise, from the time she picked her up the day following her surgery, Penny seemed to simply have no concept that she was down a limb, and without complaint, she happily hopped out of the hospital doors and up into the family car. 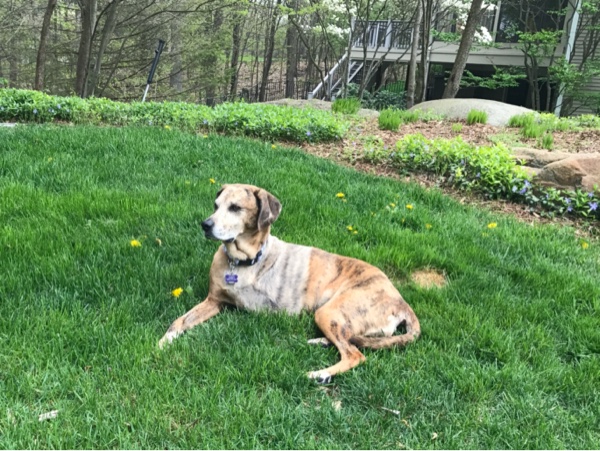 With a diagnosis of osteosarcoma confirmed by cellular examination at an offsite laboratory, Dr. Swanson clearly laid out and discussed the treatment options, including chemotherapy, pain meds, or simply doing nothing. Any combination of these was an option, and Dr. Swanson assured the family that they could switch course mid-treatment, as the next decisions would not be etched in stone. Meanwhile at home, Penny recovered beautifully from the surgery while her family braced themselves for the stigmas and expected (human) side effects associated with chemotherapy.

In April 2017, Penny began her chemotherapy at Blue Pearl. Each chemotherapy session lasted a brief 1.5 hours from check-in to discharge. Throughout her chemotherapy treatment, Penny’s only physical symptom was a mild upset stomach, which was controlled with medications. As Dr. Swanson had assured them, dogs experience chemotherapy drastically different—and milder—than humans do. By August 2017, Penny’s chemotherapy treatment had come to an end. For the first year-and-a-half, she returned every six months for radiographs evaluated by Dr. Swanson to check for the return of the cancer. The continuity of care for Penny between the team at Blue Pearl and her family vet, Dr. Anderson, was comforting for Denise and her family and a source of stability throughout the journey. 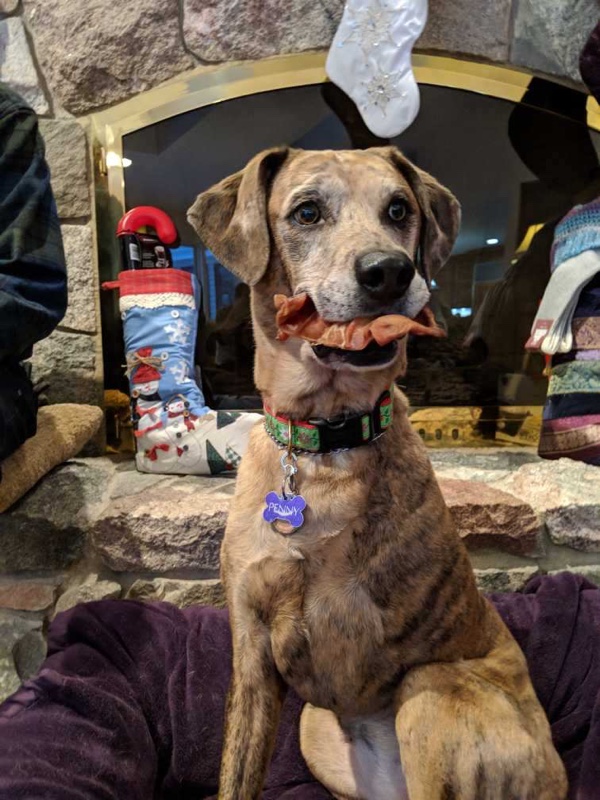 Today, Penny remains cancer-free and at the center of the empty nesters’ home. Though Denise wasn’t aware that veterinary oncologists existed at the time of Penny’s diagnosis, she is now a vocal advocate for seeking the expertise of a veterinary specialist should your pet ever receive a difficult diagnosis. When asked for advice for pet parents who have just received a difficult diagnosis about their animal, Denise stresses the importance of finding a specialist who makes you feel like you have a voice and are a part of a team.  “Follow your instincts to find a specialist you can trust,” Denise explains.

Communication and being spoken to as intelligent pet parents were two things Denise always treasured with Dr. Swanson, as well as the thorough job her team at Blue Pearl does in keeping Penny’s family vet, Dr. Anderson, up-to-date and in the loop. At the recommendation of Dr. Anderson, Penny continues physical therapy, which is helping her age with grace and maintain her gusto for life.

Three-and-a-half years after her diagnosis, Penny maintains her spirit of perseverance and runs just as fast as she always did, with her three remaining legs. At home and at veterinary visits, she has earned the nickname “Pretty Penny the Miracle Dog.” Despite osteosarcoma’s typically poor prognosis, Penny has defied those odds – thanks in large part to her family’s decision to seek out a Board-certified veterinary oncologist. Denise and her family say they will always be grateful for Dr. Swanson giving Penny a new lease on life and look forward to enjoying her raccoon-chasing antics for years to come.