Megaesophagus in Dogs and Cats
Close

Megaesophagus in Dogs and Cats What is a megaesophagus?

Most commonly, ME develops in adult animals as an acquired condition. However, certain breeds are at risk for congenital ME, meaning they are born with ME. These breeds include the Irish Setter, Great Dane, German Shepherd, Labrador Retriever, Chinese Shar-Pei, Newfoundland, Miniature Schnauzer, and Fox Terrier dogs as well as Siamese cats.

The most common cause of ME in adult animals is idiopathic. Idiopathic means that an underlying cause is not identified. Idiopathic ME is a diagnosis made by eliminating other potential causes first.

Acquired ME in adult animals may be caused by:

Megaesophagus may also occur in just a segment of the esophagus if there is an obstruction such as:

What are the most common symptoms of megaesophagus?

Since the esophagus is unable to propel food and water into the stomach, that material accumulates within the esophagus causing the following signs:

Patients with congenital ME typically start regurgitating shortly after weaning (once they start eating solid food). Regurgitation puts the patient at risk of aspiration pneumonia.

Symptoms of pneumonia include:

In a patient with acquired ME, there may be other symptoms related to the underlying cause, such as weakness or stiff gait.

How is megaesophagus diagnosed?

Diagnosis of ME can often be made with radiographs (X-rays). The radiographs should also be evaluated for pneumonia present at the same time. If radiographs are inconclusive, then fluoroscopy may be performed. Fluoroscopy is a moving ‘real time’ radiograph, so esophageal motility can be observed. The equipment for this type of testing is usually only available at referral centers, and the test is completed and interpreted by a veterinary specialist. For this diagnosis, the patient swallows a liquid called contrast, which highlights the esophagus.

What other testing is typically recommended after diagnosis?

What is the treatment for megaesophagus?

Patients with acquired ME are treated for their underlying disorder. If an obstruction is present, endoscopic treatment may be used to relieve the obstruction. Medications are indicated for diseases such as myasthenia gravis. However, dependent upon the severity of the ME, it may not resolve despite treatment.

For patients with congenital or idiopathic ME and for those patients with unresponsive acquired ME, care is supportive. Unfortunately, there are no proven medications able to directly improve esophageal peristalsis (motility). However, patients with ME are often prescribed medications to decrease acid reflux.

The mainstay of care is feeding small, frequent meals in an upright position. This position uses gravity to move food and water along the esophagus. Using a Bailey chair can facilitate upright feeding. The patient should remain upright for 15 to 30 minutes after eating or drinking. There are several websites (e.g. www.baileychair.blogspot.com and www.k9megaesophagus.com/bailey-chair.html) that provide instruction on Bailey chair construction.

The consistency of food best suited for a particular ME patient requires trial and error including:

For patients whose symptoms are not controlled through upright feeding or who find a Bailey chair uncomfortable to use, then a permanent feeding tube can be placed. This tube goes through the pet’s side directly into the stomach, bypassing the esophagus altogether.

What is the prognosis for megaesophagus?

Long-term prognosis for ME is guarded as patients are usually euthanized due to repeated bouts of pneumonia. However, for owners able to dedicate the significant amount of time and care needed for management of ME and patients that adapt well, affected pets can have a good quality of life.

Figure 1 – Esophagus of a normal dog 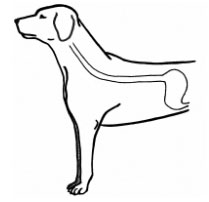 Figure 2 – Esophagus of a dog with megaesophagus 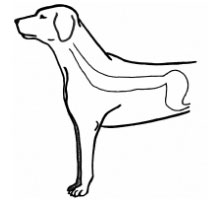